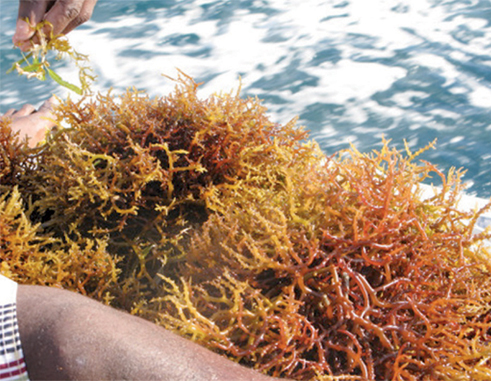 A PROMISING young St. Lucian has formulated a way to capitalize on an unfortunate situation which for some time has posed as a nuisance to residents in the eastern part of the island.

JohananDujon is a 21 year old Sir Arthur Lewis student but doubles up as the Owner/ Managing Director of Algas Organics.

Dujon has created an “industry shaker” of a product out of the tons of sargassum seaweed that has washed up along the beaches and seasides of the communities of Dennery, Praslin and Micoud.

Algas Organics is a new company which produces a 3-in-1 organic fertiliser, pesticide and fungicide. The liquid product works for plants and gardens and comes in two sizes: the quart bottle which sells for $35 when diluted, can give up to five gallons (one bucket) of fertiliser and the one gallon bottle which is priced at $108.86 can cover over one acre of land once diluted.

The 21 year old entrepreneur recounted the origin of the idea telling The VOICE that after seeing the reports about the nuisance of seaweed in the local news, he was informed by a friend that the floating greenery had the properties to be turned into a good fertiliser.

Dujon said with the help of the Youth Business Club, (YBC)Invest St. Lucia and the Ministry of Agriculture, he set out to put that theory to the test.

“It was a very arduous process trying to perfect a formula, so to speak, because you want consistency in your product. You don’t want one person to get one thing and somebody else to get another. It took us about three months to perfect the product and that was literally every single day of testing and perfecting”

Dujon said what he really wishes for right now is for the product to become better known.

Whilst the product may be unknown to many at this present time, Dujon’s breakthrough product has attracted attention from a number of retailers who he is currently in talks with to purchase his product including: Renwick & Co,

Algas Organics has also been picked up by the likes of Mamiku Gardens in Micoud which recently made a bulk purchase and have expressed their satisfaction.

As if this wasn’t enough, Dujon is well on his way to joining the Fairtrade family with his product after having positive dialogue with that organization. He said, “That is one of my budding accomplishments. Aligning myself with Fairtrade gives me the opportunity to make a real impact in St. Lucia when it comes to food security and how farmers feel when it comes to the input and just running a farm”.

Chairman of the Youth Business Club, Stacey McVane said she is beyond proud of Dujon.

The YBC assisted the youngster with the marketing, branding and distribution of the product and has allowed him to use their facilities as the core of the operation rent- free.

McVane said: “He will encounter a lot of hurdles so we’re actually making it more facilitating for him and other young people”.

For her part, she said what she would love most of all is to see Dujon’s business get off the ground. Dujon, who was nominated for this year’s St Lucia Busibness awards “Young Entrepreneur of the Year” showed that he was well on the way to doing just that.

Dujon had one message of encouragement for other young people in St. Lucia who are trying to find employment.

“Opportunities”, he said, “always present themselves and exist everywhere, but we need to look carefully to identify and exploit them. Also, I would encourage all young people to have faith in their idea. If you have a concept that you think can be successful, don’t listen to negative criticism but use constructive criticism and move forward with it; have a mentor…someone you can bounce ideas off of and finally, surround yourself with people who dream big…just as big as you”.