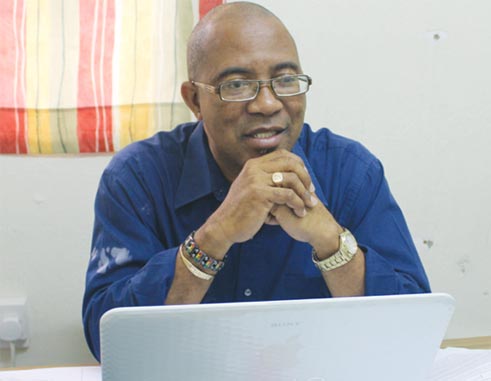 I can still remember the first article I wrote for The VOICE back in 1988 when I started as a cub reporter. It was about a fire that had partly destroyed a home at Arrundel Hill, Marchand my birthplace. The story appeared in the Wednesday edition of the newspaper; back then there were only two editions, Wednesdays and Saturdays.

My jubilation continued when my byline appeared on the front page of the Saturday edition that very week. There, for the world to see, was my name, the writer of the lead story for the week. That story was about casinos. My elation though was short-lived. The same week I started work I also got a glimpse of what it’s like in the bowels of newspaper preparation to meet deadlines for the presses and the newsstands.

Back then I wrote long articles, two pages and more. I thought that was the way to go. And let’s face it, it looked good, or so I thought. Mr. Guy Ellis was editor then. Imagine my horror when I saw the “surgery” he did on what I thought were masterpieces. His red pen was everywhere on the pages of the articles. That same week I learned about story structure, style, the role of an editor, word economy, compact writing instead of long winded pieces. I also leaved about the important role advertising plays in the life of the newspaper.

I soldiered on, wondering what to do with the $600 monthly salary I was receiving because even back then it could have hardly purchased much. But the pay was not a deterrent. Having to step up to be on the same level as reporters like David Vitalis, Lawrence James, Vincent Lewis, and Ryan O’Brian (sports reporter) and occasionally, Ellis himself, head of The VOICE editorial department then, was quite a task and a humbling experience at the same time.

Mention must be made of Mc Neil Jn Marie (deceased), photographer par excellence who was in charge of the photo studio at the time. We reporters back then called it the “Dark Room” not only because film had to be developed in total darkness, but for other reasons as well. All those who were once reporters at The VOICE during the days of the “Dark Room” know exactly what I’m talking about. Those were glorious days, marvellous days, wonderful working days at The VOICE.

From Jn Marie I learned the rudiments of photography which stood me in good stead when I attended a course in newspaper journalism in Berlin, Germany that included a segment in photo journalism.

The aforementioned crew was, in my view, the best newspaper reporting team ever assembled under one roof in Saint Lucia.

Working with those guys was the best experience I’ve had at The VOICE. We were a team, working together, sharing assignments, photos, lambasting management every now and then for its tardiness in providing the necessary tools to do our work, like recorders, cameras, film, photographic paper, batteries for the recorders and cameras, transportation for assignment purposes. The team broke up in 1994, when Ellis departed, ending an era of The VOICE supremacy in newspaper reporting, or so I believe.

Another experience that needs sharing, not because I could smile at it today, but because it captured the atmosphere at The VOICE back then that impacted positively on my experience working there, even today. It’s the manner in which The VOICE embraces its employees. We are like family. This was demonstrated when I was ‘arrested’, or so I thought, by two police officers sent by a High Court judge to do just that. I was at my desk at the time when the policemen entered the editorial department and asked for me, requesting that I accompany them to the court house.

The charge, well no charge was read to me but the argument was that I was in contempt of court in that I had failed to adhere to a court directive not to report on a certain discussion that took place between the opposing attorneys and the judge.

As the court reporter for The VOICE at the time, I was reporting on a murder case. Foster sr. was the lead attorney for the defendant. He argued that the story which appeared on the front page of the Saturday edition would be injurious to his client. The VOICE drew their wagons in a circle and came to my rescue. The result was that I was set free after sitting in the High Court for almost the entire working part of the day.

Attorney Alberton Richelieu, who was in court that day still pokes me whenever he sees me by quoting what the judge told me before letting me go “Mr. George you were sailing close to the wind.”

But working at The VOICE is more than just reliving the ‘good times’ and having a laugh remembering hilarious moments. It was also a time of growing up, developing into the type of man who learned to think first and talk later, to ask questions first instead of choosing to make assumptions. Working at The VOICE, in the editorial department to be precise and surrounded by information from all sectors of the economy and colleagues with insights into several of the issues of the day, and in contact with the movers and makers of the issues that impact both negatively and positively on citizens, has deepened and broadened my thought processes.

Not only can I handle criticism of my work, which is needed, especially from persons who have travelled the road than I have, but I have also learned that my job, primarily, is to inform people so as to assist the public in making sound judgements on issues of the day that impact on them.

My experience at The VOICE has taught me not to abuse the role of a journalist that is entrusted to me for selfish or personal gain and neither should I settle for shoddy work that as a journalist, I hold a very important role in the overall governance of my country.