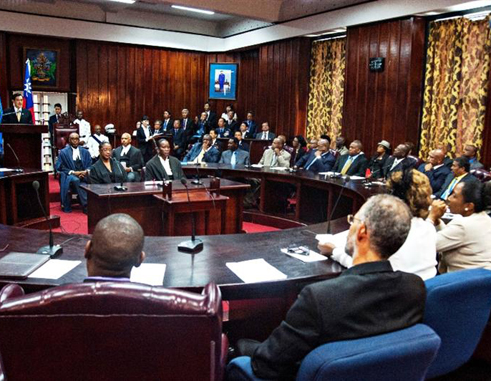 THE EDITOR,
HOW many more blunders shall we allow Kenny D. Anthony to place upon our backs and by extension “fair Helen.” Here is an individual who worked tirelessly to implement a labour code which cost him the 2006 general elections. Despite his own description of the VAT as “oppressive” he rushed it through like an insane man. Today, he comes to Parliament with a fait-accompli proposal apparently prepared by an unreliable cohort to add another four parliamentary positions which will cost the nation some $400,000 annually, an exercise which could be easily solved with a limited amount of common sense. Two responsible individuals from the Ministry of Infrastructure or from the Ministry of Social Development could easily assist a Member of Parliament for the Gros Islet constituency in providing additional assistance when necessary.

St. Lucia has a population of some 172,000 which is equivalent to a mere village in a larger country where a town council handles that amount of people, so why on God’s earth we need an extra four parliamentarians in addition to the 17 which already exist and we know for a fact that the Prime Minister makes every decision in respect to what transpires.

St. Lucians must come out in large numbers and stop these dictatorial and insane policies from taking place similar to what transpired when he stubbornly refused to pass on the savings on the cost of fuel.

Jeff Stewart, a former Comptroller of the Inland Revenue Department who was once a supporter of the Anthony regime spoke openly on hot button issue on Wednesday advising the nation that the VAT implementation in St. Lucia has virtually destroyed the economy. Despite one call from a party hack who posed the question as to why so many countries adopted the VAT policy, Stewart reminded the caller to reflect for a moment on all the countries which implemented VAT and to note that they are all going down the tube, hence the reason why VAT has to be continually increased as the years have gone by.

VAT is equivalent to a sick cow being milked and sooner rather than later, the cow will perish and this is exactly what will happen to all the countries which implemented the VAT system.

Stewart who spends 50% of his time in Canada is appalled at the economic state of St. Lucia as he returned home. Businesses are closing at an alarming rate and layoffs are the order of the day while government continues to borrow more and more and taking new loans to pay off old loans.

This is the state of St. Lucia today and the business community and the Chamber of Commerce must get together and put an end to this ridiculous state of affairs.