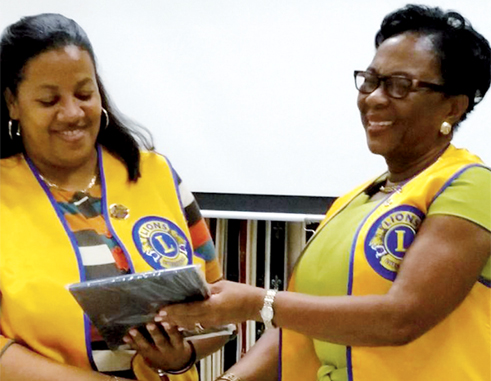 DISTRICT Governor Isaac Solomon conducted the annual audit of the clubs in Zone 3B (Saint Lucia) last month and praised the work of the Lions fraternity here.

The audit concentrated on the survey which was conducted on the status of the clubs, focussing on the areas of membership experience, reward and recognition, club operations and service delivery. The audits were conducted in an open and frank atmosphere and the District Governor expressed his pleasure at the atmosphere during the audit. He was especially pleased with the work that the Leo Club of Castries has been doing, according to a release from the Castries club.

Following the audit of the clubs, Saint Lucia played host to the other Lions and Leos of Regions 3 which also includes Barbados, Grenada and St Vincent & the Grenadines.

The group broke up into two Zone meetings – Zone 3B the Lions and Leos of Saint Lucia and Zone 3C – the Lions and Leos of Grenada and St Vincent & The Grenadines. The meetings were very successful and productive. Zone 3B saw some positive growth when they inducted five Lions into the Vieux Fort Lions Club and one Leo into the Leo Club of Castries.

The afternoon session was the regional meeting which recorded an unprecedented registration of 130 Lions and Leos.

In addition to the presentation of reports by the three Zone Chairmen (Zone 3A (Barbados, Zone 3B Saint Lucia and Zone 3C Grenada and St Vincent & The Grenadines), the meeting received a report from Lion Nicolyn Moore of District 60A, Lions Clubs International Foundation (LCIF) Chairperson on how to access grant funding form LCIF as well as an update on funding disbursed in District 60.

The meeting accepted the nomination of Lion Sherwin Greenidge of Barbados as the candidate for the position Second Vice District Governor for the lionistic year 2015-2016.

The regional meeting was blessed to have our District Governor, Lion Isaac Solomon, who presented a status report of the Sub-District 60B. Region Chairman Lion Maureen Graham, indicated how pleased she was with the attendance and the work that the clubs in Region 3 were doing. She encouraged clubs to continue on that path.

The highlight of the meeting was the presentation of the diamond, Progressive Melvin Jones Fellow award (one of the highest awards in Lionism) to Chairman Graham.