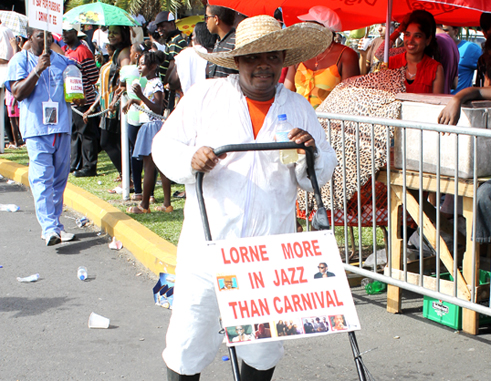 ROBERT “Don” Calderon is perhaps the most famous “Tent Pinèz” in the history of St. Lucia’s calypso.

The pint sized mechanic who is more commonly known as “Poulbwa” received his name as a youngster from teachers and peers at the St. Mary’s College. The name, which when translated to English means Termite, was given to Calderon because of his jovial yet impish and naughty personality and it has stuck with him ever since.

Calderon is widely seen as the life of the party and the numerous calypso events island wide just wouldn’t be the same without him.

The jester is also a well-known participant and three time winner of the annual “Ole Mas” competetition which takes place during the carnival parade where a small group of participants display comedic double meaning messages and costumes highlighting current events in a humorous manner. According to Calderon, he lives for this time of year…here’s why.

The VOICE: How long have you been going to these tent events?

Poulbwa: I can’t remember the exact year I started but I know I started when tents were held at the Town Hall then at Clarke’s Theatre and I have seen a lot of calypsonians come and many go and I’m there up to a day like today. Actually there were guys who wouldn’t want to perform when they see me at the tents.

The VOICE: What is it that draws you to the tents every year

Poulbwa: I love going around to the calypso tents because I like the creativity. Somebody has a story and they come and they bring it out. I love that instead of listening to dancehall music and all that stuff. I prefer my calypso. I love it so much and when I go there, I do my stuff. Any mistakes that the calypsonians make, it’s for me. It just…has me so I can’t even wait for the tents. They just have to be there but then we cool out a bit from around the times of the quarter final until the next year.

The VOICE: When you go to these events, what kind of shenanigans do you get up to?

Poulbwa: We pinèz go there to make a mockery of the calypsonians. To see you have waited a whole year and you produce a song and you’re not giving us what we want…we don’t do the booing thing but you have to get it. We write a simple strip and let you read it. It keeps the atmosphere going and going

The VOICE: You indicated that you believe the quality of calypso music is dying, what changes have you noticed between then and now?

Poulbwa: In the past, there was a lot of humorous songs so people came to the tents expecting that but now, everything is computerised and the fellas go really deep into the music so we’re not really getting the jovial factor, it’s all serious stuff. Right now some people come to the tent and you might have a good song but because there is no humour, we’ll say “Chantésa la pa bon” and people don’t listen to it so the tents remain empty. I understood that people are trying to form a humour calypso tent so when you go inside there it’s just comedy and I’m looking forward to going to that one.

The VOICE: Do you really attend every tent event?

Poulbwa: Every single one. Even down the coast when South Calypso Tent first launched, I used to go every single night when there was an event and drive back to Castries. I have also gone to Dominica with the Ambassador’s calypso Tent just to be involved in calypso.

The VOICE: Now let’s get to Ole Mas. Have you been participating for as long as you have been doing the tents?

Poulbwa: No. I’ve been doing it for like ten years now. I used to jump carnival with the Cozy Guzzlers and when their vibe started dying out I decided to come on the road and from the first year I did it, it has been good up to now and I’ve won three times.

The VOICE: Where do your brilliant ideas for this event come from? What inspires you?

Poulbwa: It comes straight from the mind like “ST. LUCIA TOURIST ‘BORED’ IN CARNIVAL” and people just like it.

The VOICE: Some of the Ole Mass costumes are extremely outrageous at times. How do you feel transforming into such a spectacle?

Poulbwa: Well the message that you want to draw out to the public must be presented accordingly because like I said, it’s two sided so you will see the writing but then when you see what I’m wearing, you’ll get the double meaning. Also, that’s the cheapest costume and the cheapest way to jump carnival and I get to jump with every band so I love it unlike when you pay all that money and you can only jump in one little spot with your band and they tell you to form a line. With Ole Mass, I go everywhere.

The VOICE: What changes have you noticed with Carnival over the years?

Poulbwa: Carnival has become a business now. It’s nothing like before where people used to go out there, have mass camps and make their costumes. Everything is a business. People order costumes so like watching carnival here, in Dominica, Grenada etc. is the same thing.

The VOICE: Finally, what can we expect from you this carnival season?