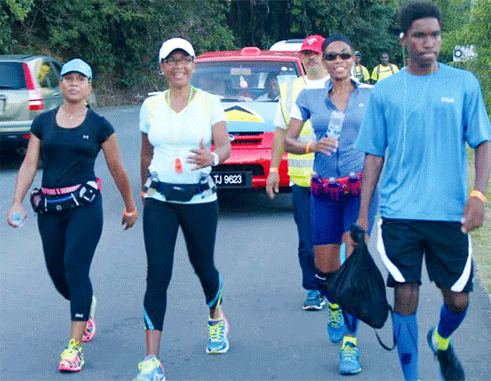 THE coordinator of the third annual Independence Challenge round the island walk is elated with the success of this year’s event. He spoke with THE VOICE Thursday about the highs and lows that came along with undertaking such an event three years in a row.

John Michel said he has watched an activity which began as a 30 year old hobby for himself, his brothers and a few friends materialise into an experience of sheer determination.

Participants conjure up the strength and determination to attempt the 88 mile event. This year, the walk began at Super J in Cul de Sac and ended at the William Peter Boulevard.

Michel said he also noticed broken personal records and a rise in the number of female participants which is promising and something that he would like to see more of.

“One must take hats off to them, especially the women, for taking on the challenge of being on the road for so long”.

Michel said there were no prizes involved since the walk is for the purpose of Independence Day. Those who take part, he said, do so for the joy and accomplishment of being involved in such an activity. He felt the introduction of prizes would remove the essence of the activity.

He said: “What’s going to happen is that it will be contaminated because people will not want to do it for the spirit in which it started but they will now want to do it because they guess there’s something to gain. So even if I don’t continue it tomorrow, I would suggest to whoever takes it on that they make certain that they don’t put anything attached to it because it will get thoroughly contaminated”.

As happy as he was with the turn out and effort put in by all involved, Michel said he was disheartened by the lack of recognition by individuals especially from the government ministries, namely the Ministry of Sports.

“It’s shameful to indicate that we started off in the presence of one Minister of government who coincidentally was the same one who saw us off the year before”.

Michel urged the nation to be part of next year’s list as “the experience is more enjoyable than it may appear”. On the other hand, those interested in taking part next year should begin to go for their Sunday walks from now on to be prepared.

Arthur St. Juste was first to finish the walk in 18 hours and 25 minutes. The first female to complete was Sharlene Louis at 20 hours and 15 minutes and the final person to complete the challenge was Cecil Burton after 31 hours and 44 minutes.