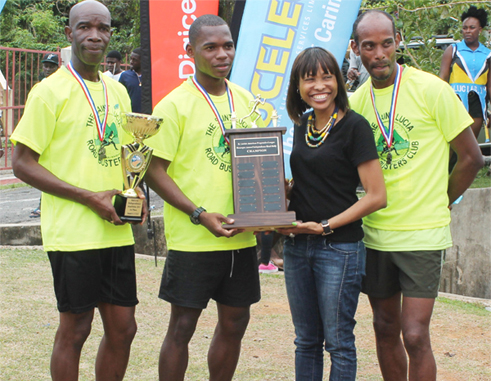 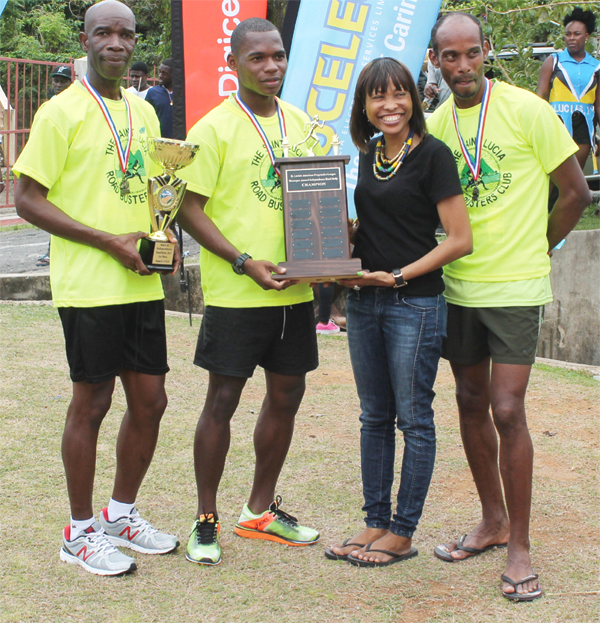 THE Mon Repos community came alive on Sunday as the Youth and Sports Council staged the 27th edition of its popular Road Relay from Mon Repos to Wannee Bridge and back. The event again drew a record number of supporters and on-lookers from start to finish.

With an early delay due to no fault of the organizers the runners headed onto Vieux Fort Highway as they passed batons at seven other stations along the way and upon their return they finished on the Patience Playing Field. But it was all Road Busters, St. Lucia’s number 1 road running club that made light work from a field of a combined 15 male and female teams to win the EC$1000.00 prize money and championship trophy.

With no French team this time around the Road Busters with the likes of seasoned campaigners Jason Sayers, Michael Biscette and Anthony Neptune proved that they are true champions as they led from start to finish, although stiff competition came from El Nino at various change overs. Also in the Road Busters line up were Mitch Alexander, KerwinSerieux, Sheldon Descartes, Tim Jules and Torre Richelieu.

The Road Busters finished in a time of 1 hour 36 minutes 59 seconds, El Nino from Blanchard was second in 1 hour 40 minutes 14 seconds, third was AngeGer Secondary in 1 hour 45 minutes 57 seconds, while Grass Roots proved too strong for the other community clubs winning that category in 1 hour 46 minutes 47 seconds.

Meanwhile, one of the coordinators of the event Lanean Alexander – Brice said she was satisfied with the overall organization Alexander – Brice added: “Not the best in terms of participation, but good enough. We had an early hitch to the 8:00 a.m. start as teams were arriving at 9.00 a.m. and I didn’t think it was fair to turn them away”.

Following the event there were a number of fun sports, such as tug of war, sack race, lime and spoon, three legged race. There was also a health clinic with the assistance of Spartan Health Science University where participants and members from the community had their blood pressure, weight and sugar been checked.