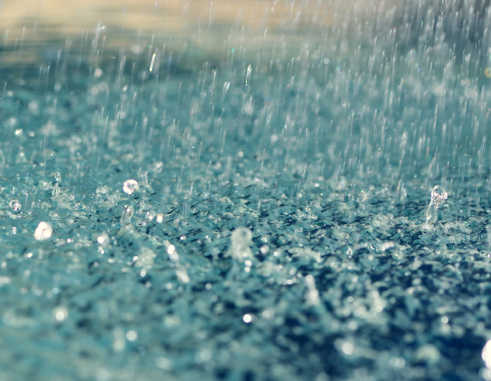 THE steady cadence of rain on rooftops started in the very early hours of Saturday morning, the eighth day of November, 2014. What had begun as a light patter, barely discernible as rainfall, soon turned into an unmistakable roar that drowned out other sounds. It was a sound of magic. The ferocity of the torrential downpour beat down the sultry, sleep-depriving heat, releasing a rush of contented sighs from damp bodies now turning this way or that for a snug fit before surrendering to the sleep-inducing embrace of Morpheus. Eros worked his own magic in other bodies, as the rooftop drumming and gradual drop in temperature became a paradoxical torch that ignited sexual desire.

When the pleasures of sleep and sex receded, and the fury of the rain continued unabated, fear, replacing initial anxiety, intruded slowly upon the national psyche. Hurricane Tomas on Saturday, 30th October, 2010, and the unnamed Christmas Eve trough of 2013 were seared into living, recent memory. Images, sounds, and information—captured, amplified, and immortalized on electronic media—of the two extreme-weather phenomena, became infamous benchmarks for comparing past and newly-named weather systems. Hurricane kills 14 people in St. Lucia… declared the 2nd November, 2010 headline of the online edition of the BBC News, while local radio stations had become inundated with telephone calls of eyewitness accounts and pleas for assistance for victims in the worst-affected areas. Following the 2013 trough, a little girl now lives with the painfully traumatic memory of watching her father and uncle being swept away and drowned by raging flood waters. In both of those events, hard rain had triggered massive flooding and landslides that immobilized, damaged, destroyed, trapped, cut off, and killed!

As always, damage assessments followed in the wake of such disastrous natural events. As always, the reports and exhortations by the National Emergency Management Office and the local Red Cross followed each new, increasingly destructive, weather bomb while the clean-up, rebuild, and pick-up-where-we-left-off resignation of the populace resurfaced. As always, the talk show circuit regurgitated the usual rancid, freshly wrapped announcements, pronouncements, and emotionally-charged emptiness, while international climate change scientists continued their dire warnings for the earth based on observations of climate change phenomena and measurements of greenhouse gas emissions, and the relationship that bindEarlier this year, the Intergovernmental Panel on Climate Change (IPCC), an organ of the United Nations Framework Convention on Climate Change (UNFCCC), issued its most damning report to date. Put simply, the voluminous report warns that global warming must be kept to less than 2◦ C to stave off the rise of extreme weather events. And, the 2◦ C scenario could only work if less than 2900 billion tonnes of human-induced carbon dioxide is released into the atmosphere from 1870. The bad news is, approximately 1900 billion tonnes have already been released up to 2011. This means that the buffer between the world and rising extreme weather events is only 1000 billion tonnes. That figure is steadily being eroded while the heated debates continue and the developed, and some developing, countries continue their attempts to avoid, shift, or minimize their obligations.

There’s nothing new here. That story is an old one, as old as time itself. Powerful people, powerful enterprises, powerful nations, usually dictate the course of world events—for better or worse. Families, politicians, conglomerates, multinational corporations, international institutions conceptualized and established by powerful nations, with the means to wield power for their own development, increased wealth or standing, determine the fate of the world’s majority by their actions or inactions. So, decisions taken in the United States, United Kingdom, Germany, France, or some other first world country, sometimes redound to the detriment of tiny Saint Lucia—intentionally or otherwise—just as the huge carbon dioxide emissions from those countries and others in the developed world, probably contributed to the hard rain we experienced on 8th November.

But, there are other types of hard rain of our own making. And, the deluge is threatening to sink us even faster than what has been premised on the production of another 1000 billion tonnes of carbon dioxide in the atmosphere. We hear its hard, thunderous roar on our airwaves. We see the rushing floodwaters on our streets, in our homes, and in our Parliament. We experience the destruction wrought by its continual pummeling of the mainly soft soil of gullible minds.

After slavery was abolished in the Caribbean in the nineteenth century, freed slaves, followed by their descendants, began a struggle not only for better working and social conditions, but also to take control of their political future from white, British plantation owners and their descendants. In Saint Lucia, the struggle was led by men and women who later formed themselves into a trade union. Their activism galvanized ordinary Saint Lucians into recognizing them as leaders, following them, and making demands for change on the white establishment. This led, inter alia, to adult suffrage in 1951, and the formation, soon thereafter, of the island’s first political party consisting of members of the trade union movement.

Those were heady days of sleepless nights. Of civil disobedience and valley plantation disruptions. Of protest marching to the gospel song: We Shall Overcome. Of fiery, electrifying eloquence that soared on the wings of eagerly-anticipated political control of destinies long denied such inconceivable dreams.

Those were the days of “massa” speeches. Of fighting new “massa” doctrines that were developed from old “massa” legacies.

Those were the days when the flames of selflessness burned bright and true in breasts committed to the collective struggle. Until the first sparks of another truth—ugly and unsettling— set in. Until the discerning few were shocked into the hard reality that the white “massa” was being replaced by the black “massa”!

The following excerpt is taken from an article I penned in October, 2009, for the Voice newspaper, as part of a Consumer Corner series on government and governance in Saint Lucia:

In our last article, we asked the following questions: Why are we usually saddled with such mentally or intellectually decrepit people? Who elects those people to the highest offices in the country and on what basis?

“The first question isn’t so simple when we really think about it. The short answer, however, isn’t that difficult to conceive of. We’re saddled with such people because too many of us are, ourselves, mentally or intellectually decrepit. But, why? Although there are several issues we could address here, we’ll deal with just a few. Let’s begin with our elected officials.

In the main, we seem to be attracting the wrong crowd to political office. Why? Too many of our House of Assembly and Cabinet-aspirants see politics and government not as an opportunity to serve Saint Lucia, but as a means to help themselves to the better things in life; as a means to acquire greater prestige; as a means to garner privileges they never had before; as a means to nurture certain contacts that they can and do use for their benefit when they are booted out of office or decide to call it quits. Secondly, whether or not they’re equipped with the right tools, including relevant knowledge, a sound education, some experience in something useful, and desirable character traits, many of these people are shockingly shallow on the issues of not only government and governance, but other real-world issues that occur locally, regionally and internationally, and which impact us and our ability to further develop Saint Lucia and its people.

And, our Constitution (Sections 31 and 32) doesn’t help much as it sets the bar quite low for persons who wish to be elected as members of the House.

“Some of the people who may well possess the characteristics needed to tackle the 21st century problems confronting our extremely vulnerable island won’t even begin to consider the possibility because of the maypwee and movaylang nature of our politics. We’ve grown accustomed to this stuff; we’ve come to accept it; we revel in it, even though more and more people are expressing a profound distaste for it. We can’t help ourselves! We prefer the demeaning diatribe of irrelevant innuendo and mindless mumbo-jumbo to the informed discourse that must be associated with the people who wish to represent us. This is no accident. Even our education system has failed us in this regard. Notwithstanding that statistics show a rising trend in the number of Saint Lucians who pass through secondary and tertiary level institutions, too many of our exam-focused graduates rely mainly on regurgitated responses to exam questions to pass those exams, and exhibit brainless behavior once they graduate. In other words, they join the ranks of mentally and intellectually decrepit people who may, or may not, elect mentally or intellectually decrepit people into the highest offices in the country.
“Now let’s tie the questions together. We have a perversely ironic travesty being perpetuated in Saint Lucia wherein the decrepit are leading the decrepit. This is facilitated and encouraged by a political party culture, which further seduces our already gullible electorate into a see no evil, speak no evil, and hear no evil mindset characterized by zealous devotion to a non-ideal. This becomes glaringly evident when some constituencies vote in elections. In Laborie and Vieux-Fort North, whether the SLP fields two ticks, or two horses, as candidates in elections, they will win those seats. And, in the constituencies of Micoud North and Micoud South, two bacteria, or two goats, will easily win those seats once they run on UWP tickets.”

But, the subdued fury of largely unread words paled and fell away before the onslaught of the tens of thousands enslaved by old world illiteracy, new world illiteracy, newly-minted pieces of silver, new foreign colonialists with their controlling international institutions and economic models that do not benefit the world’s masses, and new local colonialists with their new narratives driving our escalating condition.

On Saturday, November 8, 2014, a boy, no more than seven or eight, appeared on the street in the late morning in the pouring rain, clad only in a pair of faded shorts. His face reflected the joy he felt as he danced, pranced, and splashed about, arms outstretched and face upturned to the big raindrops. He appeared not to have a care in the world, testing the strength of the rushing water in a nearby two feet wide concrete gutter first with one foot, then the other. In later years, he may do well for himself—with a university degree, and a fairly well-paying job to support himself and his family. Or, he may become one of the world’s hundreds of millions of young people with hard, angry eyes who, experiencing hard rain after hard rain, have nothing left to hope for.