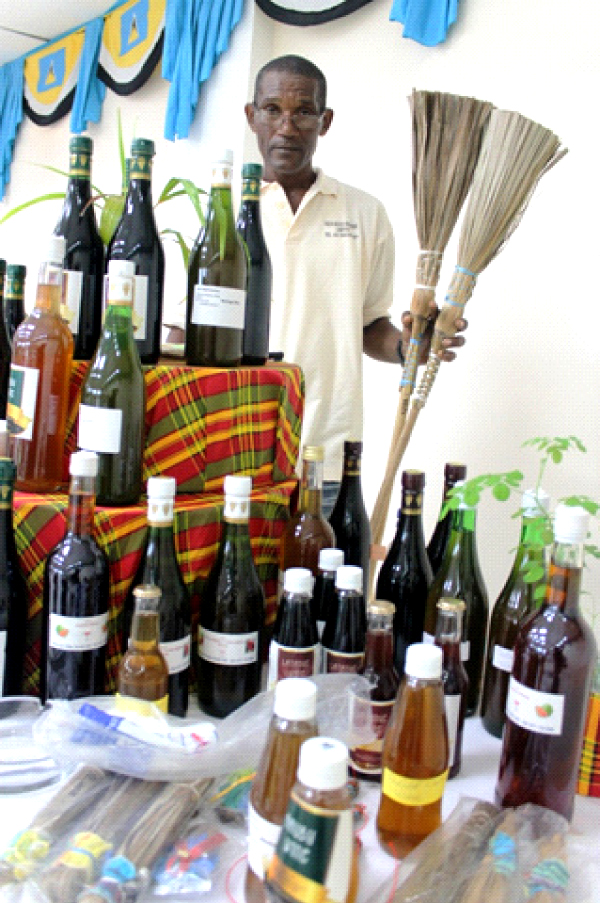 WHEN Patrick Velinor began making a living selling latanier brooms just over ten years ago, he never envisaged that his business would have led to bigger and better creative ideas. All he bargained for back then was that his customers would use his trusted brooms to get the right sweep. As it turns out, Velinor’s humble business idea has created a niche industry which sees him on the verge of both sweeping and drinking up the competition.

Velinor, who owns Vel’s Multi-Services, currently makes and sells mauby wine, latanier wine, wax apple wine, guava wine, moringa wine, sugarcane wine, plantain wine, among others. He even makes wines using different blends of flavours. But it’s the latanier wine that he credits for much of the success of his business thus far.

The self-described “creative fella” owns a latanier and mauby farm in Mabouya Valley, Dennery. Some years ago while making brooms, he noticed that the birds were feasting on the fruits of the latanier plants. Figuring out that there must be something useful he could do with the fruits himself, Velinor curiously made contact with the Ministry of Agriculture that had issued the plants to him for support.

Soon enough, he began making latanier juice, offering samples to participants at the various workshops he would attend, soliciting feedback. Based on the positive feedback he was receiving, he decided to run some tests on the product. Following nutritional analysis tests in Canada and Trinidad, Velinor said he was told that no similar wine was found to compare it to. Things really took off from there.

“They told us it was an indigenous product that we should secure. Afterwards, the Ministry of Commerce came in and assisted me and I’m currently working with the Small Enterprise Development Unit (SEDU). We are planning to penetrate the hotels, restaurants, the local households and even visitors market segments with these products. Recently, a guy told me that if I went to England with even the latanier or moringa wine, I’d be a rich man. So I’m now fighting hard to see that I get to wherever it takes me,” Velinor explained to me.

Velinor participated in Saint Lucia Homecoming in 2010, exploring the market potential for his new product. His business was rewarded by the Saint Lucia Industrial and Small Business Association (SLISBA) for its contribution to local industry and Velinor recently received a certificate from the Saint Lucia Bureau of Standards (SLBS).

Last month, Velinor participated in a trade exhibition organized jointly by the Taiwanese Embassy and the local trade ministry. His products were among the many that received rave reviews from Saint Lucians as well as Taiwanese Embassy officials. The free samples of his wines also went down well with patrons. One customer, he said, purchased three cases of latanier wine on the spot at the trade exhibition.

During the exhibition, Taiwanese Ambassador James Chang, was also impressed with the wax apple wine. Some years ago, the Taiwanese introduced the wax apple to Saint Lucia. Velinor said one of his aims is to send a few bottles of his wax apple wine to Taiwan. For now, however, he is focusing on getting a good product better despite the positive reviews that continue to pour in.

“I want to make it good so that when it comes out I don’t have to look back and say I didn’t do it right,” Velinor said. “So it’s a slow process in taking it to the supermarket shelves. I want them to get to the shelves but I’m taking my time. I want to be fully satisfied with my product first, even though everyone’s telling me that the products are of excellent quality.”

Velinor says he believes Saint Lucians are a talented people who sometimes never get the kind of exposure and financial support needed to go forward. In fact, the whole process of conducting the analysis on his product had to be financed by him. He recognizes that being in business is a bit of a hassle getting the ideas organized. Nevertheless, he believes he’s on his way to success.

If for some strange reason you’re thinking that Velinor is about to forget the deep roots of his business, sweep that thought under the rug. As he told me, smilingly, there’s a much bigger responsibility on his shoulders to keep that end of the business going.