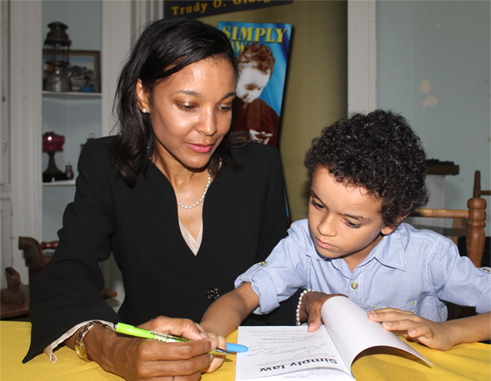 LOCAL attorney Trudy O. Glasgow has launched her first book, “Simply Law”, which comprises part of a collection of articles that were published in The VOICE over the past seven years.

The book launch took place last week Thursday evening at the Folk Research Centre (FRC) at Mount Pleasant. Governor-General, Dame Pearlette Louisy, family members, sponsors and members of the legal fraternity turned up for the event for which Glasgow was showered with praise.

“Simply Law” is the result of several years of writing to which Glasgow has dedicated to sharing free legal advice in the simplest terms to readers. The book, published by Star Publishing, has 104 articles and is divided into 11 chapters.

During the book launch, Glasgow explained that she was inspired to write a weekly legal column some years ago while studying at University of the West Indies (Cave Hill Campus) after reading a similar weekly legal column penned by Justice Oliver Jackman. After finding Justice Jackman’s columns too complex, she felt she needed to write a simpler column that everyone could easily understand.

Upon returning to Saint Lucia seven years ago to practice law, Glasgow decided to begin the weekly legal column. She pitched the idea to her parents, Carlton and Julia, who said the column was a good idea. Justice Michael Gordon, she said, also liked the concept.

Three months after her return to Saint Lucia, her first column under the “Simply Law” banner – “So You Want To Be A Lawyer?” — was published in The VOICE. Since then, she has submitted a weekly legal column to that paper which has caught on with readers. Her father, suggested the title for the column, which eventually became the title for the book. Trudy’s son, Ethan, appears on the front cover of the book, wearing the gown she wears to court.

A key highlight of the book launch saw Glasgow reading briefly from some of the articles in the book. She also signed and sold copies of her book, as well as presented copies to its sponsors: 1st National Bank, Bank of Saint Lucia, CIBC FirstCaribbean, Scotiabank, and the Saint Lucia Bar Association. Signed copies were also presented to the Governor-General and incoming president of the Saint Lucia Bar Association, Mary Juliana Charles.

Glasgow expressed thanks to everyone involved in her writing career thus far, including former VOICE editor, Victor Marquis, who saw the need to run the column. The book, she said, became possible because she was able to reach an audience for her column through The VOICE.

Part of the proceeds from the sale of the book will go to Trudy’s mother’s charity, the Goodwill Charity Group.

Featured speaker at the book launch, Dr. Winston Parris, described Glasgow as a legal luminary destined to do great things, “truly a breath of fresh air, a true renaissance woman” whose impact on the local legal landscape was immense. He also credited her hard work and brilliance, adding that the book was testimony of those traits.

“Trudy has truly demonstrated a selflessness and commitment to education by informing the lay citizenry of the fundamentals of law,” Dr. Parris said. “The book is in fact clear, concise and thorough. So lawyers, students and the general citizenry can benefit from reading this book.”

For more information on the book and the author, send an email to trudyoglasgow@lawyer.com.