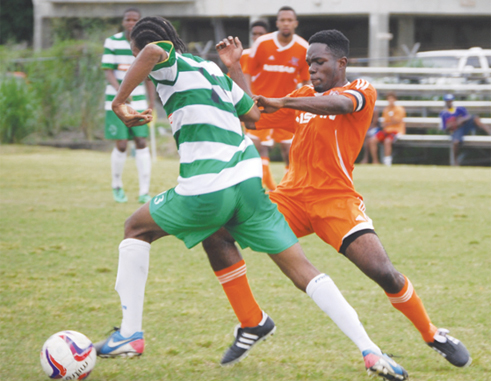 THE semi finals of the Northern Zone Under – 23 competition took place at the Sab Playing Field in Vigie this past weekend with wins for Super J Northern United and Nyah over their opponents.

Ed Williams opened the first half flood gates in the 26th via the penalty spot, Eden Charles made it 2 – 0 in the 31st minute. Williams then ound the back of the nets to bring his tally to two in the 32nd minute, while Troy Greenidge goal in the 41st minute sealed the deal at the half time whistle. There were no goals scored in the second half despite Valley Soccer Club’s several attempts at goal.

On Sunday Nyah came up against Sun Risers FA. At the end of the first half Nyah enjoyed a 2 – 1 advantage. Nyah open the scoring through Travis Valcin in the 12th minute. Sun Risers quickly equalized when Shaquille Aldonza found the back of the nets in the 14th minute, Nyah nosed ahead again with a strike from Andel Constantine in the 41st minute.

On the resumption following the half time break both teams stepped up the tempo but it would be Ricardo Estwick’s goal in the 90th minute that would ensure Nyah a final spot.

According to the organizers the finals will now feature Super J Northern United against Nyah at the Gros Islet Playing Field on Sundayfrom 5.00pm, while for the third place silver ware Valley Soccer Club and Sun Risers FA will play at 3:00p.m.