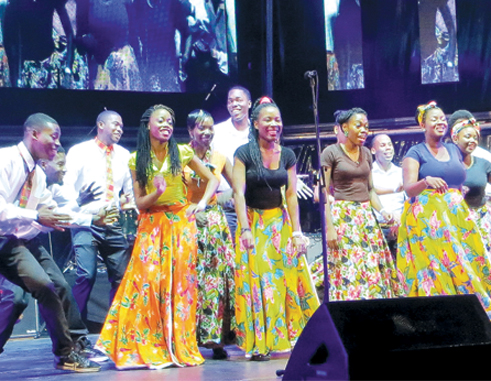 THE country’s leading youth community choir JUSTUS – Saint Lucian Voices Together in Harmony is this Christmas season spreading good cheer to communities throughout the island of Saint Lucia.

Last Saturday along with the Evergreen Singers and the Ideal Girls, the choir sang at a benefit event for the St Lucia Arthritis and Lupus Association (SLALA). Following this event, on Sunday the choir sang alongside eight other choirs, the Charles Cadet Orchestra and the Royal Saint Lucia Police Band performed at the Festival of Carols, organized by the CDF; officially commencing the Christmas season in Saint Lucia.

As we get closer to Christmas Day, JUSTUS looks forward to a number of other performances where the general public will be able to join them and share along in the wonderful melodies and harmonies which are usually associated with the festive season.

Tomorrow alongside the Barclays Singers from the island of Barbados, JUSTUS will perform pieces from their 2014 Christmas Programme at the Our Lady of Fatima Church in La Clery. Of course, the choir’s main event of the season will be held on December 17 at the Bay Gardens Hotel. The production of #AJUSTUSChristmas2014 will begin at 7:00 p.m. at the cost of $20 which can be paid at the door.

Ending their Christmas performances to the public, once again in the community of Laborie, JUSTUS will perform their entire programme for the enjoyment of all who wish to join them on Sunday December 21 at the Laborie Parish Centre.

JUSTUS would like to take the opportunity to thank all corporate and direct sponsors including but not limited to; DandBsounds, MusicanMan St Lucia, Jeffery and Jeffery (forming part of the Guardian Group of Companies) and of course their musical directors, Mr. John Paul Bailey and Mr. Jason “Bachelor” Joseph.

JUSTUS wishes all a Merry Christmas and a Happy New Year!