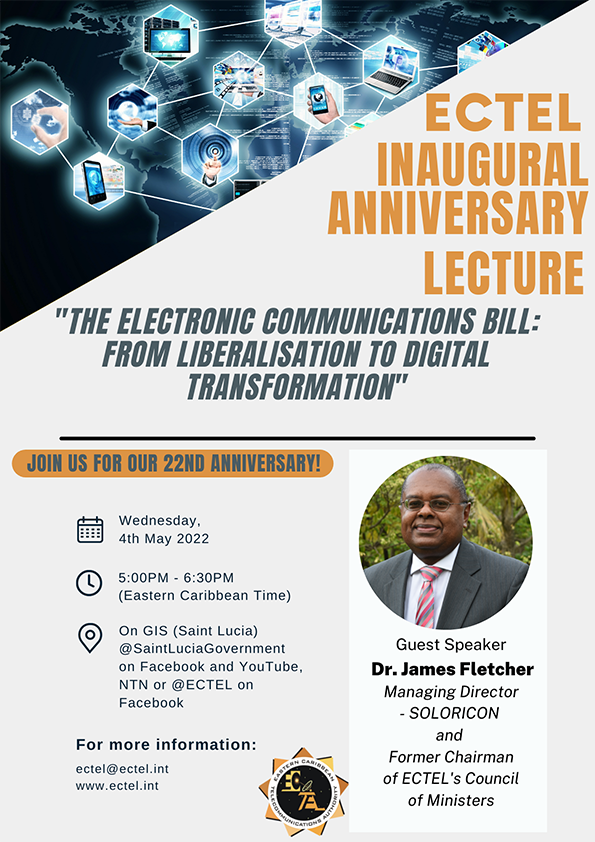 To celebrate its 22nd anniversary ECTEL will be undertaking a few initiatives including the posting of congratulatory messages on their social media platforms and an ECTEL Bytes special on their Facebook page. The feature event is the inaugural Anniversary Lecture on Wednesday, May 4th from 5 p.m. (Eastern Caribbean Time) on the Government of Information Services – GIS Saint Lucia’s Facebook page and YouTube channel (@SaintLuciaGovernment) as well as @ECTEL on Facebook.

The Lecture will be delivered by the inspiring and scholarly Dr. James Fletcher, Managing Director of SOLORICON and Former Chairman of ECTEL’s Council of Ministers. Dr. Fletcher will speak on the theme, “The Electronic Communications Bill: From Liberalisation to Digital Transformation”. The theme is particularly timely and important as the world moves towards using digital technologies to solve the many challenges brought on by the pandemic.

Also, on hand to deliver opening remarks is the current Chairman of ECTEL’s Council of Ministers and Senior Minister and Minister of Infrastructure, Ports, Transport, Physical Development and Urban Renewal, in Saint Lucia, Honourable Stephenson King.

As the first regional telecommunications regulator in the world, ECTEL has accomplished quite a few milestones over the years, such as ensuring affordable electronic communications services by way of recommending price cap regulations, and the implementation of Mobile Number Portability across all Member States which enables users to keep their current telephone number when switching from one telecommunications service provider to another.

To learn more about ECTEL’s journey, our accomplishments and challenges, be sure to participate in what promises to be a fruitful lecture on the Electronic Communications Bill (also known as the EC Bill) and how its enforcement in ECTEL’s five Member States will advance consumer empowerment and support a new legal and regulatory framework for the electronic communications sector.