Ministers and secretaries of agriculture of 14 Caribbean countries related some of the dramatic consequences of the COVID-19 pandemic in the region. They listed new challenges in strengthening food production and emphasized the support that the Inter-American Institute for Cooperation on Agriculture (IICA) provided in the fight against food and nutritional insecurity in 2020 – a year that had crippled tourism, the engine, of Caribbean economies.

The ministers and secretaries were participating in IICA’s virtual 2020 Regional Accountability Seminar, which gave an overview of the hemispheric organization’s actions to support the Caribbean productive sector. Announcements were also made about new initiatives while a frank discussion was held about difficulties stemming from COVID-19, indicating that the technical assistance received had been invaluable. 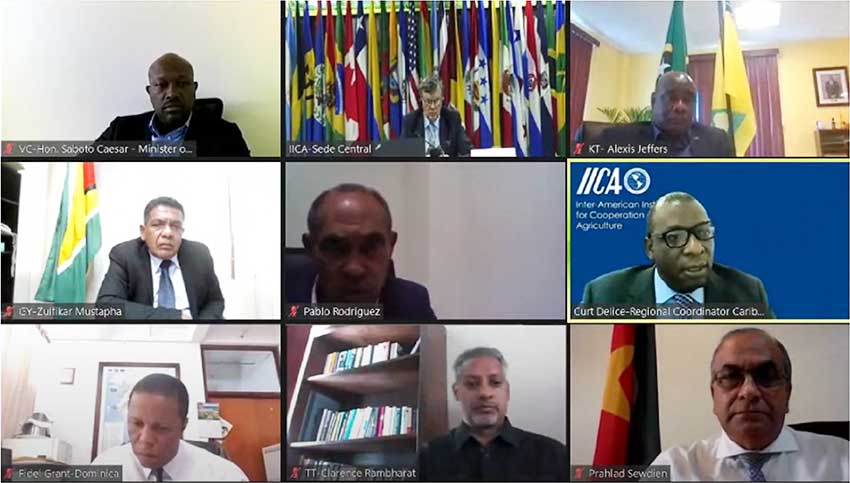 “Food systems faced immense challenges in 2020. During this period IICA assisted us to improve productivity in agriculture and to boost climate change mitigation capacities”, said Zulfikar Mustapha, Guyana’s Minister of Agriculture, adding that in Guyana the Institute provided support through a bio-fortified rice project, which is extremely important for Guyana’s food security.

“For me, it is truly gratifying to participate in an accountability seminar at this level and I congratulate Manuel Otero (the Director General of IICA) for his excellent leadership during and before the pandemic. He is working diligently with his team to benefit agriculture in the region. We have been experiencing volcanic eruptions and will conduct a simulation exercise in the sector to prepare us to face the worst, save lives and protect the assets of farmers. We share the same vision with respect to providing opportunities to improve livelihoods in the region. I am anxious to see how we can build more synergies among countries, with the assistance of IICA,” said Saboto Caesar, Minister of Agriculture of St. Vincent and the Grenadines.

“Moreover, I hope that we do not adopt an individualistic approach, but instead discuss synergies that will allow us all to advance, as a region. The lines of communication between the States and IICA should remain open. The doors of IICA have always been open to support our regional effort,”Caesar added.

The IICA Director General spoke of the commitments of the hemispheric organization with respect to the countries of the Caribbean, vowing to continue supporting the advancement of the local rural sector. He mentioned aspects such as maintaining the infrastructure of the fourteen offices, providing adequate human and financial resources to implement the strategies deployed in the Caribbean, including a special fund to support the region.

“We are going to continue supporting proposals and securing external funding to address agricultural and rural development issues, serving as a bridge and facilitator for horizontal, South-South and Triangular cooperation, while capitalizing on the complementarities among different regions”, commented Otero.

He also stressed the importance of supporting the post-COVID-19 renewal and positioning of the agriculture and rural sectors of the Caribbean.

In this same vein, he mentioned the importance of support to the region, within the framework of the Caribbean Community (CARICOM), through an agricultural advisory mechanism, which will capitalize on IICA’s experience in serving as the Secretariat for ministerial forums in Central and South America. This will foster and support regional integration, as well as provide continuity for South-South cooperation programs, such as Apicaribe, which is driving the development of the beekeeping industry.

The pandemic has had a tangible effect on the economy of the Caribbean. As Fidel Grant, Minister of Agriculture of Dominica summarized it, “We have seen a drop in our exports, loss of jobs and closure of hotels”. Countries in the region experienced a decline in their Gross Domestic Product (GDP), by as much as 10% in some cases, and agricultural production is considered to be essential to turning the tide.

Peter Phillips, who was representing Indar Weir, the Barbadian Minister of Agriculture, indicated that,

“We are optimistic that this expected recovery will be ongoing. In Barbados, we hope to increase our production of fresh produce, because we depend on imports to satisfy 80% of our supply needs. We will require IICA’s assistance for innovation, particularly in water management”.

“We established farmer’s markets around the island to allow persons to access food. IICA was fundamental in helping us to develop work plans”, said Elvis Morain, Permanent Secretary of the Ministry of Agriculture of Grenada.

According to the ministers, Covid-19 has highlighted challenges in the Caribbean that require urgent attention, such as addressing the effects of climate change. Although the contribution of these countries to greenhouse gas emissions is miniscule, climate variability has an enormous impact on the region.

“At this time, agriculture is the only sector where we can experience strong growth. It must be our path to the future of the country and region. The reality is that we could not continue to depend continuously on larger countries to feed us”, stressed Alexis Jeffers, the Minister of Agriculture of St. Kitts and Nevis.

IICA’s swift response to work in coordination with the ministries of agriculture to develop actions to guarantee food security was highlighted as a key element in preventing the pandemic from creating even more devastating consequences for the region.

Joseph Cox, Assistant Secretary-General of Trade and Economic Integration at CARICOM, mentioned that

“IICA was quick off the mark to respond to calls from the region and developed an ecommerce platform to facilitate direct and continuous government to government communication about the level of production in the region”.

The search for synergies was also emphasized by Haiti. In the words of PatrixSévère, Advisor to Haiti’s Minister of Agriculture, “Haiti and the other countries would like to increase the extent of our interaction. Together, we will be able to survive this difficult period and to surmount the obstacles in order to create a more prosperous Caribbean region.”

“IICA has assisted us in agricultural development. They are providing assistance in terms of our gender agenda and we have a program with rural farmers for which IICA has provided technical support”, reported Souraya Niles, representative of the Minister of Agriculture of St. Lucia, Ezechiel Joseph.

Clarence Rambharat, Minister of Agriculture of Trinidad and Tobago, indicated that the COVID-19 crisis had increased costs for shipment and transportation of goods—among other items—but the country hopes to continue strengthening agroindustry, based on research and trade.

“IICA has always supported us in the areas of health and safety. We are working to develop a biotechnology center of excellence to be a model for the region”, said Rambharat.

Technology and training: the cornerstones of recovery

One of the strategies to tackle the crisis is based on the digitalization of agricultural assistance. In collaboration with IICA and CARICOM, a low-cost technological solution was developed, which will allow Caribbean farmers to use their mobile phones to access training material that will enable them to be more efficient.

During the ministerial exchange, there was also a presentation of the AgriExtApp, which is in its pilot phase in Antigua and Barbuda, The Bahamas and St. Vincent and the Grenadines.

The app provides agricultural extension content for the cultivation of crops, such as cassava and sweet potato, which in addition to their high nutritional value, could provide an excellent alternative for exportation to other regions and value addition, with a view to the tourism industry.

“The Bahamas congratulates IICA on the creation of the AgriExtApp and is honoured to be a part of the pilot program”, said Delreese Moore Grant, representative of the country’s Minister of Agriculture, Michael Pintard.

Gregory Bailey, Director of Agriculture in the Ministry of Agriculture of Antigua and Barbuda commented that, “The AgriExtApp is marvelous, as it is an efficient means of improving communication in an era of social distancing”.

On the other hand, Courtney Cole, Technical Director at Jamaica’s Ministry of Agriculture stressed that, “The app can be used in times of disaster and will provide greater sustainability to our agriculture industry. He also lauded IICA for its focus on climate smart agriculture and its promotion of mushroom production, targeting young people and women.

The discussion also addressed the situation in the sector, in light of the United Nations Food Systems Summit with heads of state, slated to take place at the end of September 2021.

IICA, represented by its Director General, who is a member of the Summit Champions Network (a support structure for the global meeting) is driving three key ideas for the dialogue: farmers first, science as the basis for public policy discussion, and agriculture as part of the solution and not of the problem.

“We cannot tackle our challenges alone” insisted PrahladSewdien, Minister of Agriculture of Suriname. “We must work together as CARICOM countries. I endorse IICA’s suggestion to develop a joint position at the Summit and to ensure that our interests as developing countries will not get lost among the interests of the developed countries”.

In closing, Otero remarked that,

“We have designated the Caribbean as a priority region, given its vulnerability to climate change. We are introducing more and more actions, in keeping with our strategies and priorities for the region”.