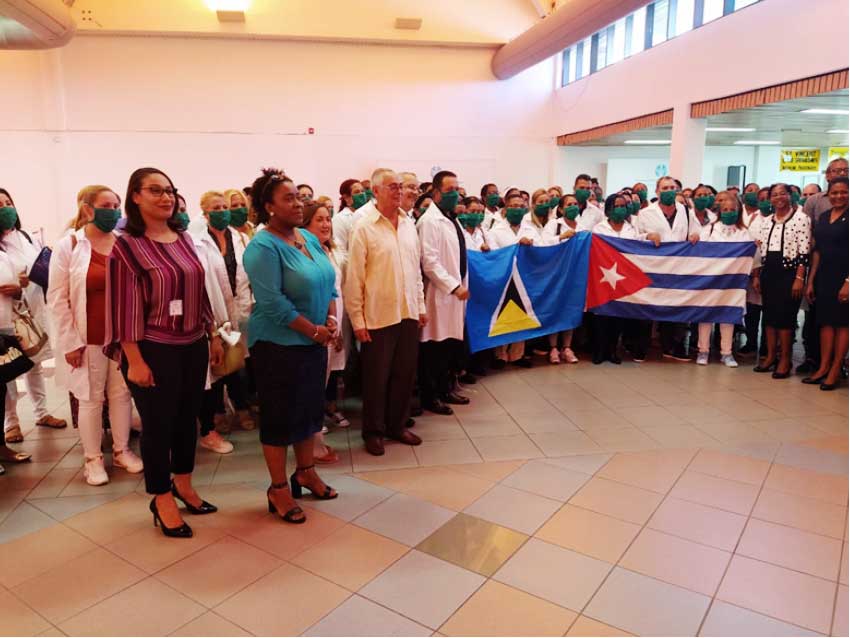 A statement from the Guild of Graduates noted, “We believe that we speak for the more than 700 Saint Lucians who have benefitted from the Cuban higher education system when we express our complete support for this initiative.

“We wish to highlight the work done by the Brigade in St Lucia and the Caribbean in bringing free eye care to the most needy among us, the work done in Dominica after they were devastated by Hurricanes Maria and Irma, their amazing work in Africa during the Ebola crisis, and their work this year in bolstering the medical systems in the region against the threats posed by COVID-19 and the global pandemic.”

The release went further to note that these examples and many more show that Cuba and its medical brigade are “a much-needed breath of fresh air in the current global economic atmosphere, where profit always seems to take precedence over true humanitarianism; where aid organizations from the United States and others have failed us, the Cuban Brigade has triumphed.”

“No group of people has proven more selfless where public health is concerned, and we sincerely hope that the Brigade, the Cuban Medical System and indeed the Cuban people as a whole, are finally given the recognition they deserve,” the statement went on.”

The nomination of the Henry Reeve Brigade for the Nobel Peace Prize has been an initiative of French organizations, which has found strong support in different parts of the world. In Saint Lucia, the Humanistic Solidarity Association (Saint Lucia – Cuba), the Saint Lucia Medical and Dental Association and the Patriotic Association of Cuban Residents in Saint Lucia have also expressed their support for this recognition.

The Henry Reeve Brigade has become the symbol of Cuban international medical cooperation. The international contingent of physicians specializes in disaster situations and serious epidemics, and Henry Reeve was constituted on September 19, 2005 in Havana, by the historic leader of the Cuban revolution, Fidel Castro Ruz. Its objective has been not only to support a particular nation, but to cooperate immediately, with its specially trained personnel, in any country that suffers a catastrophe, especially those facing major hurricane scourges, floods or other such serious natural phenomena in addition to epidemics that are considered real natural and social disasters. The first mission was Pakistan, then hit by a severe earthquake. Since then, the Brigade has been in more than 20 countries. In the last few months, 34 Henry Reeve brigades, composed of more than 3000 health specialists, have travelled to 29 countries to support the fight against the COVID-19 pandemic. This is in addition to the more than 28,000 Cuban health professionals working in 59 countries since before COVID-19. In Saint Lucia, the Henry Reeve Brigade arrived on March 27th and since then has been incorporated into the needs of the health system and the fight against the COVID-19 pandemic.