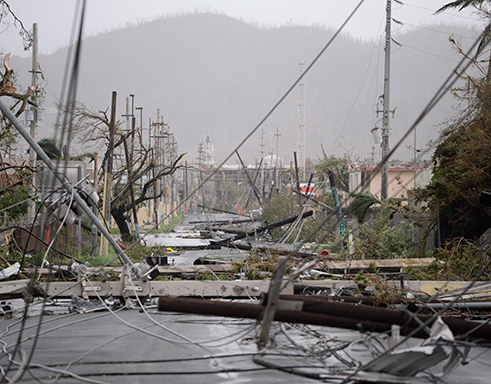 HURRICANE Dorian landed in The Bahamas and it was nothing short of a drastic hit. It’s been two weeks since the category 5 hurricane ravaged through the islands and showed just how cruelly Mother Nature can play her cards. The aftermath of the hurricane is seen all over the internet through photos and videos. The slow-moving category 5 hurricane had sustained maximum winds of 185 mph, gusts that surpassed 20mph and a storm surge that reached almost two-dozen feet. Becoming the most powerful hurricane recorded to land in the Bahamas, Dorian severely damaged the Abaco Islands and Grand Bahama.

The hurricane’s death toll has now reached 50 as new bodies have been discovered, with 2,500 people still missing. Dorian left 70,000 people homeless in Grand Bahama and Abaco in total, and relief efforts continue.

Dorian has brought into focus a question that comes up every time a disaster strikes; how prepared is Saint Lucia, or any of the smaller islands in the Caribbean for that matter, for a super storm or any natural disaster of significant magnitude. Though the islands continue to rebuild year after year when disaster strikes, it is difficult to tell how much more advanced we could be, if not always being forced to start over in this territory.

Prime Minister Allen Chastanet on September 9th 2019, visited the UN (United Nations) Office. He delivered a keynote address speaking on the matter of climate change at the UN Trade Forum. “Our extinction is imminent,” was his message. The PM noted that “the climate crisis has taken away from us the ability to control our own destiny.” Addressing the gathering of the trade and international community, he noted that there were not many more storms that we can sustain and remain viable. For that reason, the prime minister said there was heightened urgency for islands in the region to be able to build resilience. Small Island States (SIDS) are at risk particularly due to the hurricanes that continue to intensify year after year with fatalities also increasing. The core message was that SIDS were in urgent need of help. “What I am speaking about is drains, rivers, and bridges. These are civil engineering matters; it is not going to the moon. This (investment) is not, in relative terms, a huge amount of money, but relative to the size of our economies, for us it is a mountain too far. I speak to you as a human to say the SIDS need your help,” PM Chastanet stated, addressing the gathering.

Saint Lucia’s prime minister spoke from the heart about his concerns on the state of destruction on SIDS that’s evidently caused by climate change. He went on to ask “Is the Bahamas, for example, ready to migrate 50,000 people into Nassau? Is it ready to process those people by documenting them, putting them into new school systems, creating a subsidy system because they have lost their jobs and that part of the economy (tourism) is gone?”

Maldives’ Minister of Environment, Hussain Rasheed Hassan voiced his concerns within the same forum, questioning whether the solution was relocating to some distant land and becoming climate refugees. Speaking on behalf of his people, he noted, “As far as we are concerned, we do not want to become climate refugees.” Along with Daryl Vaz, Minister in Jamaica’s Ministry of Economic Growth and Job Creation, the government heads drove home the message that climate change was a clear and present danger to our existence, and that finding solutions to do with building resilience needed to be made a priority.