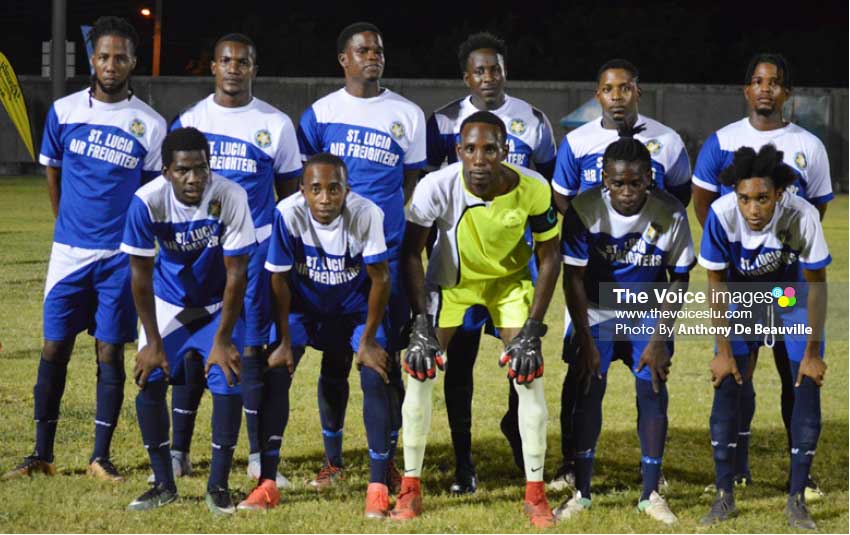 In front of an appreciative crowd of football fans, in the first semifinal, Canaries looking like a team on a mission defeated Roseau Valley 4 – 1 to march on into the finals. Once again David Henry was on the score sheet with two goals.

In the second semifinals Desruisseaux and Gros Islet played to an exciting 2 – 2 draw. However, in the penalty kick shootout Gros Islet advanced 5 – 4, to set a clash with Canaries in the finals.

Also on the same day, in the grand finals Gros Islet got into their stride very early with a goal by Aramis Lorde in the 5th minute. Ten minutes later, Nicholas Lawrence broke through on the left flank to put Gros Islet up 2 – 0.

Canaries refused to go down without a fight and their perseverance resulted in Gros Islet conceding an own goal to make it 2 – 1.

Canaries went all out in search of the equalizer which was not forthcoming as Gros Islet kept them at bay to run away winners 2 – 1 and champions of the Blackheart Big Eight competition.

On Saturday 7th, the preliminary/knockout round lived up to all the hype and excitement with some disappointment along the way as a total of ten goals were scored on the opening day.

Canaries playing true to form defeated Dennery 2 – 0 with both of their goals being scored by David Henry.

Roseau continued their impressive form coming from behind with a hard fought 2 – 1 victory over Marchand. Romiel Felix had given the Island Cup defending champions an early lead in the first half.

However, two unanswered goals by Nilan Williams and Brendon Modeste enabled Roseau to advance to the semifinals.

The third match of the day saw Gros Islet who has picked up some momentum in the last couple weeks making light work of Mabouya Valley to defeat them 3 – 0.

They got their goals from Ambris Lorde with a brace and one from Eden Charles.

Desruisseaux came into their own to defeat Central Castries 2 – 0, with goals by Brad Bideau and Kievanny Monchery.

Meanwhile, the 17th annual Blackheart/SLFA Knockout Football championship will kick off this coming weekend. This evening (Tuesday 10th) the organisers will have the Official Press Launch and Tournament Draw at the Bay Gardens Marina Haven, Rodney Bay at 7.00 p.m.