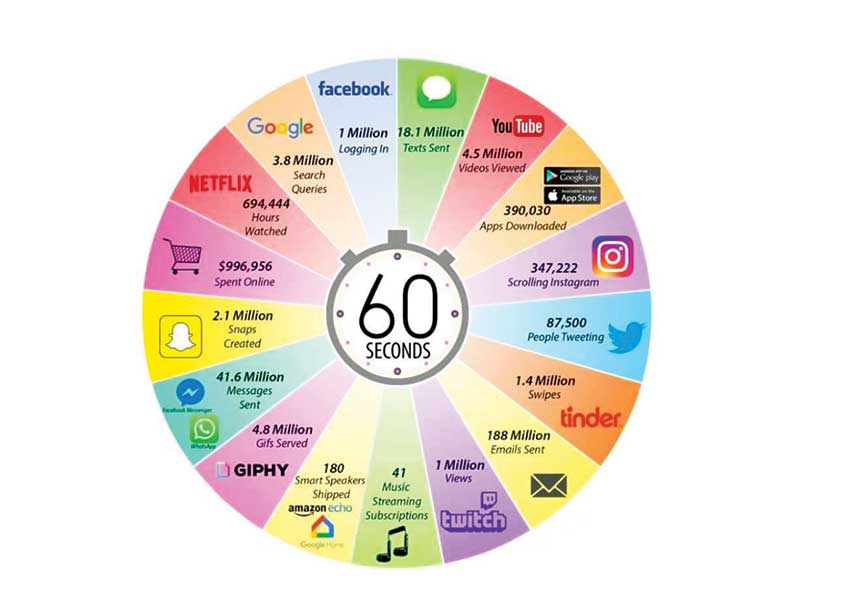 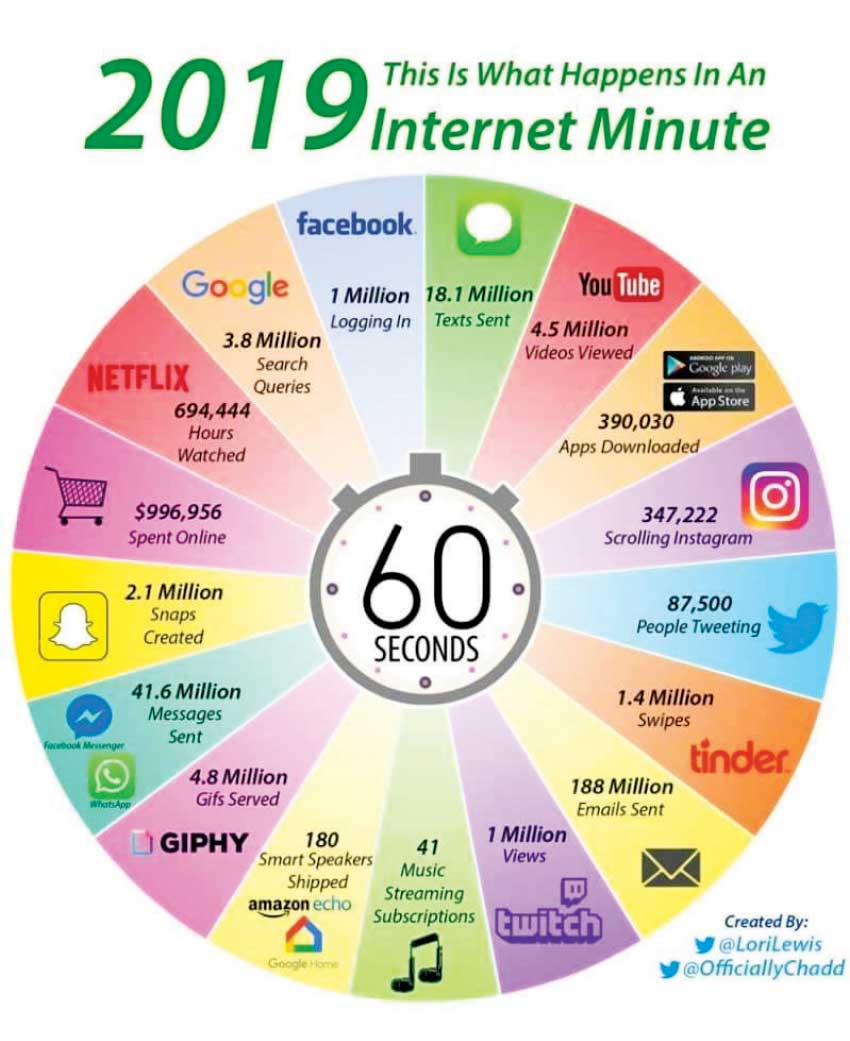 The news hound in me hounds after news all day and night because, to be in the news business and have to write like I do every day, you must try to know as much as you can about what’s happening everywhere. But even that is getting harder – and especially in this Internet Age when so much can happen in a mere minute.

I was amazed to learn (just the other day) just how much happens in An Internet Minute: 188 million e-mails, 41.6 million WhatsApp messages and 18.1 million text messages are sent; 4.5 million videos are viewed on You Tube, 4.1 million giffs are served by Giphy, 3.8 million Google Searches take place, 2.1 million snaps are created, 1.4 million Tinder swipes, one million Facebook logins and one million Twitch views; an average of US $996, 956 is spent online, 694,444 hours of Netflix films are watched, 390,030 Apps are downloaded, 347,222 Instagrams are scrolled, 87,500 people Tweet; and 180 smart speakers are shipped by Amazon Echo, as well as 41 music streaming subscriptions.

Yes—all of that in just 60 seconds. Then, multiply that by 60 every hour — and then by 24 to determine how much happens in An Internet Day.

So, I am no longer surprised when stories present findings like: Our conversations with the likes of Amazon’s ‘Alexa’ and Apple’s ‘Siri’ being recorded and studied, without our knowledge or consent, for ‘product improvement’ purposes; or, how tens of millions of private subscriber accounts are so often hacked; or the social media giants saying they’re unable to do good about a particular bad done by an untraceable hacker.

Today, hackers are hacking into banks and private corporations to steal money, countries can hack into others’ systems to create entire blackouts – and a UK hacker who was praised to High Heaven for saving the National Health Service lots of money by hacking into a thieving hack, was jailed later in the USA for putting his hacking skills to uses not approved by Uncle Sam.

I recently watched a BBC program about a teenager in Beijing who became a millionaire overnight by streaming herself live, several hours a day, just talking and showing things, in the process attracting ‘virtual gifts’ online that she either sold for cash, exchanged for better ones, donated – or simply kept and shared with her family.

The Google Search Engine was so good to me that every time I get a homework question from any child, I answer the best I can – and then advise them: ‘Next time, ask Mr Google first.’

Not that I don’t appreciate the inestimable value of a Facebook account. But I know myself — and let’s just say the cost to me would be just too much to estimate, which is why the deep and wide social media ocean – with all the skies and clouds that bring us today’s Internet of Things — is not an ocean I wish to swim in – and against the tide – until the technology makes it easier for me.

No, I am not at all interested in becoming ‘The number one-million-and-one Facebook logger-per-minute” on Earth today. The sheer volume of unread mail and postings will only continually accumulate in my insatiable mailboxes. And besides, I wouldn’t know how to know what ‘friends’ to ‘like’, which to ‘forward’ what to, what ‘requests’ to accept and/or who to ‘share’ what with.

I have nonetheless resigned myself to accept the fact that a greater online presence is always vital in my trade — and I was just about to wholly submit (yes, wholesale) like a lamb to the hi-tech slaughter, when, Lo and Behold, I saw two headline stories on Google about Saint Lucia that I found quite unbelievable, but which I just couldn’t dismiss because – after all, they were on Google News.

I wanted to do a Selfie visit to both places to see whether any new airports had been built in any of those two hilly parts of Castries. But one of my sons tried to explain how and why what I read was just the result of a sophisticated viral IT adjustment to how products are advertised on the Internet today. He was so right, as I also later saw similar headlines every day about new multimillion-US-dollar products, including private luxury jets, ‘selling like hot cakes in Saint Lucia…’

I didn’t even bother to argue with him over why he expected me to automatically understand that even though Facebook, Google or Apple may have a headline in their news about Saint Lucia that I know to be untrue, I should just accept it, because ‘This is how it’s done now.’

I’ve been down that road many times before, but the IT Caveman and the journalist in me both simply refuse to accept that ‘it’s normal’ for social media giants to just lie to you and I.

My solution is always simple: My (few) heirs and successors were all born with microchips as part of their DNA and each remains one of my key IT Home Advisers. They never forget to remind me that: ‘When everything else fails, just Read the Manual…’ To which I would always reply: ‘I just did – and it sent me Online!’

One would even sometimes dare tell me ‘Google it!’ Or ‘Consult Alexa!’ Or ‘Ask Siri!’ And in each case, after gently upbraiding whoever for their ‘impertinence’, I’d just insist that the first in my line of sight fixes my problem – even though I will still not know what to believe in this Day of the Internet Age, when news has become unbelievable.