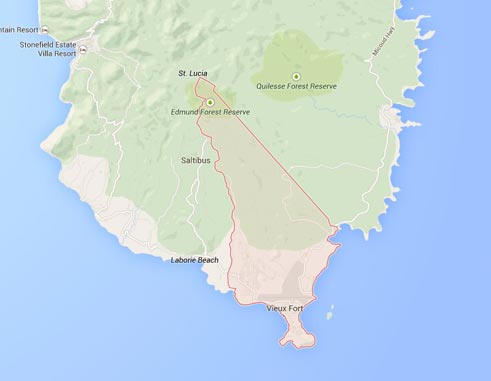 RESIDENTS of Vieux Fort say they would like to see the mayor of the community, Orricia Denbow-Bullen, emulate the Mayor of Castries Peterson Francis, by tackling issues plaguing the community head-on, and making herself more visible in the community.

Since assuming office, the Mayor of Castries, Peterson Francis has implemented a number of measures to deal with some of the issues plaguing the city, some of which were unpopular, and created a rift between the Castries City Council (CCC) and a few organizations and individuals. However, despite the unpopularity of some of his decisions, they have made the city cleaner and safer, and have created some degree of order in how certain businesses are being operated in the capital.

In various interviews, residents of Vieux Fort, including workers of the Vieux Fort South Constituency Council told this reporter that the approach adopted by the Mayor of Castries is what is needed in Vieux Fort in order to rid it of some of the perennial issues which have been plaguing it for many years.

Winston Lubin, a resident of Vieux Fort said: “The Vieux Fort South Constituency Council is not taking care of Vieux Fort. It is not doing a good job in the upkeep of the community.”

He added that many Vieux Fortians were not aware who the councilors of the Vieux Fort South Constituency Council were.

Alexander Clarke, another resident said he is not satisfied with the performance of the Mayor of Vieux Fort, who is seldom seen in the community.

“The council is not adequately dealing with the issues of garbage disposal, indiscriminate street vending and stray animals in Vieux Fort town, which is of serious concern for residents,” Clarke lamented.

Another resident who spoke to this reporter on condition of anonymity said: “The Mayor of Vieux Fort needs to do like the Mayor of Castries who walks around the city, listening to the concerns of residents.”

A number of other residents who also spoke to this reporter on condition of anonymity have expressed similar sentiments.

In an interview with this reporter a few months ago, Denbow said garbage disposal in Vieux Fort has always been a problem which she is trying her best to address.

At the swearing-in ceremony in 2016, where nine councilors were sworn-in, Bullen had said some of the areas which the council will focus on were sanitation and hygiene, health care, education and recreation. She had also promised the government officials at the ceremony that the council would do everything within its power, albeit with limited resources, to live up to the confidence they had placed in her.

Investigations by this reporter have revealed that the Vieux Fort South Constituency Council is riddled with a myriad of problems, one of which is finance.