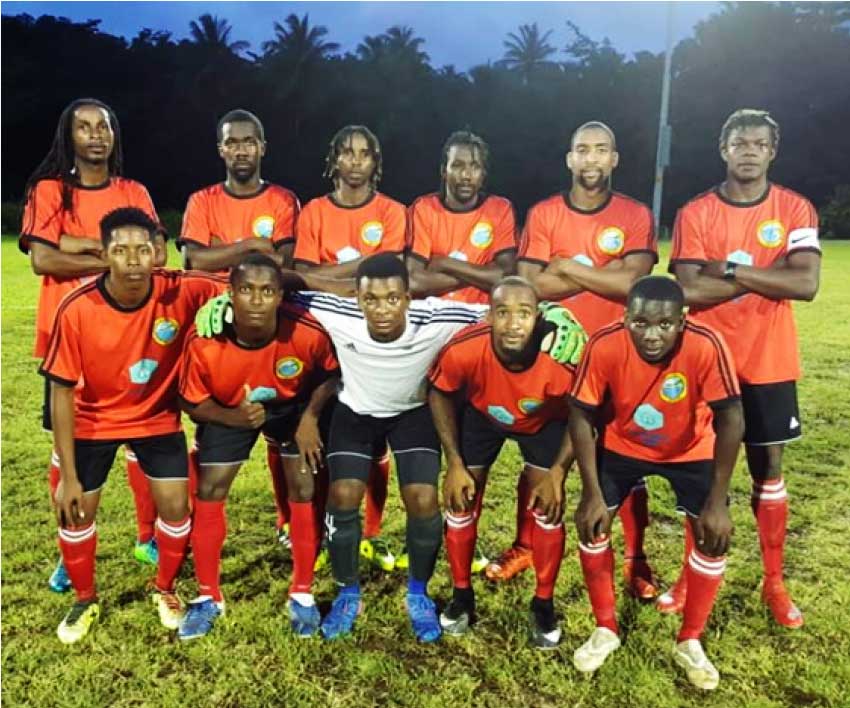 EIGHTEEN goals were scored in four matches in the Saint Lucia Football Association (SLFA) and National Lotteries Authority sponsored Island Cup this past weekend at two venues. The highlight was a 7-1 drubbing by Canaries over one of the tournament favourites Gros Islet, and Micoud defeating Mon Repos 5-0.

On Sunday 18th, at the Fond Assau Playing Field, the matchup between Anse la Raye and Dennery provided some measure of intrigue, drama and excitement.

Anse la Raye despite commencing the encounter with ten men surged into an early lead in the 19th minute. However, their joy was short lived as Dennery equalized in one minute of added on time in the first half.

Soon, Anse la Raye was reduced to nine players and despite their perseverance Dennery was able to capitalize on their advantage to score the winning goal in the 78th minute of play to win the encounter 2 – 1.

At the Marchand Playing Field (MPF) in the first of a double header Babonneau defeated a 10 man Vieux Fort North team 3 – 0.

Babonneau got their goals from Nelson Nelson in the 53rd minute, Miguel St Phore in the 61st minute and Seige Osmand in the 82nd minute.

The second encounter was delayed for a few minutes due to the Mon Repos team not being able to find their uniforms; someone had carried the wrong gear bag and this resulted in them arriving to the MPF without uniforms. They were assisted with a set of uniforms (no socks) by a Marchand League team and Vieux Fort North team.

When play eventually started, Micoud who waited patiently was off and running as they drubbed their neighbours (Mon Repos) 5 – 0. They got their goals from Shayne Paul in the 4th minute, Rav Gaspard 36th minute, Nathan Allen in the 44th minute, Molice Harry in the 64th minute and Dnaron Actilin the 81st minute.

On Saturday 17th, in a West Coast derby at the Fond Assau Playing Field (FAPF) Roseau Valley defeated South Castries 2 – 1. Roseau Valley got their goals from Brandon Modeste and Macalan John in the 25th and 69th minute respectively.

Jimmy Alfred scored for South Castries in the 79th minute.

In the game’s opener, despite a saturated playing surface Canaries continued their unbeaten streak in this year’s tournament when they inflicted a 7 – 1 drubbing on Gros Islet after enjoying a 4 – 0 advantage at the half time whistle of Referee Marlon Alcee.

For Canaries, the goal scorers were Junell Mathurin in the 11th minute, Rick Leonty in the 16th minute, David Henry in the 26th an 45th minute, Antoine Wilfred in the 48th and 75th minute and Donavan Jn. Baptiste in the 82nd minute.

Tonius Simon pulled one back for Gros Islet in the 87th minute.