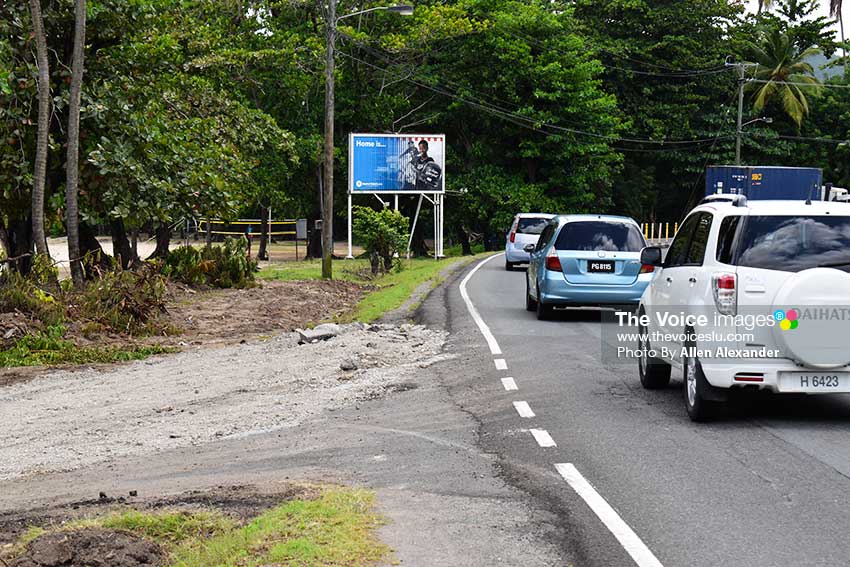 THE Government of Saint Lucia through the Ministry of Infrastructure, Ports, Energy and Labour, commenced on the morning of August 12th, a Road Widening Project of the north-bound lane from the Sandals Halcyon Resort to the Choc Roundabout. The road-works is being undertaken by the C.O. Williams Construction Company Ltd. and will transform that part of the highway into a four-lane dual carriageway.

In relation to the Road Widening Project, Shannon Labourne, Communications Officer of the Department of Infrastructure remarked, “We are very proud and very pleased to see the commencement of this project which will improve the traffic flow along this very important stretch of road.” He added that the project will also add value to road safety for all commuters traversing along this part of the highway. According to Labourne, the estimated cost of the project is in the region of 2 to 2.5 million EC dollars, and the project is expected to take approximately eight weeks for completion.

The Senior Engineer, Sherman Nahum Sylvester, asserted that the project was part of the Government’s initiative to decrease travel time between Gros Islet and Castries. He noted that the project also contributed to the effort of improving road safety along that stretch of road. Sylvester stated, “What you notice is happening at the Sandals intersection where two lanes merge into one will no longer be. You will have that two-lane access where you will be able to just traverse instead of the bottleneck which occurs near Sandals, which is actually a sore point where persons can have little incidents and accidents. So we are looking to avoid this and ensure that the road is free and clear for all road users.”

Steve Brinkhurst, Contract Manager of C.O. Williams Construction Company Ltd, said that they have already started putting in place traffic and pedestrian safety measures. The first phase of the project will consist of the erection of retaining walls and construction of extended drainage. He stated that the first phase of the project will have “little to no interference with the current traffic movement.” He announced that the second phase of the project will involve the removal of existing asphalt and the application of new asphalt. Brinkhurst announced “We are planning to do those works after hours, in the night time, to minimise the traffic disruption.” He declared that the only problem was the inability to divert north-bound traffic. “The problem here is that we cannot really divert the traffic around this area; there’s no route,” he noted. For this reason, Brinkhurst indicated that all high-impact work will be executed at night with “the usual C.O Williams quality project Management expertise.”

Sponsored | Article continues below
Labourne gave the assurance on behalf of C.O. Williams that the project will be delivered on time and will be one that Saint Lucians will be proud of. It must be noted however, that the Road Widening Project could not be executed without the use of land adjacent to the highway which belongs to Sandals Halcyon Resort. On this note Labourne expressed gratitude to Sandals on behalf of the Government for contributing a portion of their property toward the project. He articulated, “We are very grateful for the support of Sandals International who have partnered up with the Government; there is no land allocation, Sandals are actually contributing a very significant portion of their property towards this project and we’re very thankful to Sandals International for that support.”
Share this post: