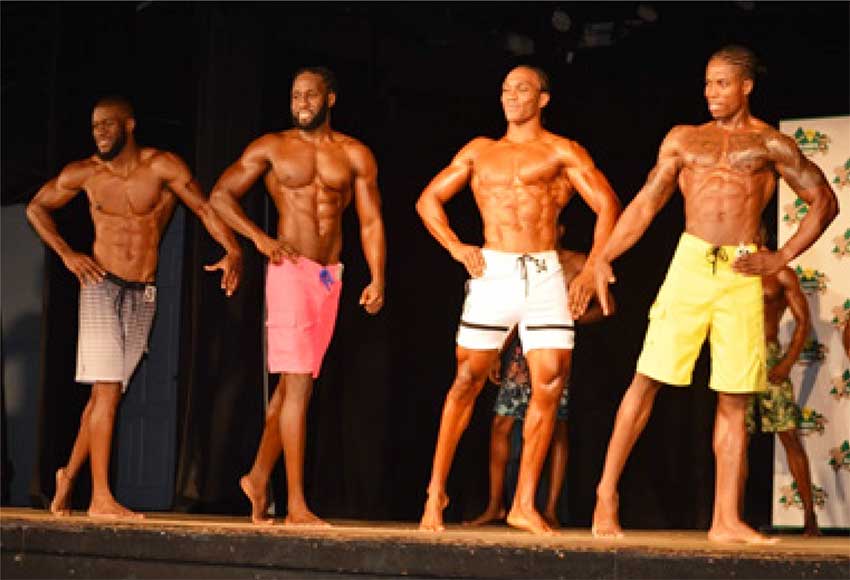 THERE was no stopping Joneil Pelage representing La Borde’s Gym from muscling his way to the Mr Saint Lucia Bodybuilding title on Saturday evening in front of a packed National Cultural Centre (NCC).

There was optimism all around at the NCC from the time the four competitors in the senior men’s category graced the stage.

On the Judges’ scorecards Pelage was good enough on the night to nose ahead of last year’s second place finisher Orville James of the Sidonie’s Brothers Gym.

Honora was large and most definitely in charge of the Bikini category. It was her first year competing at the championships and she looked like a natural for the duration of her segment showing no signs of nervousness.

The experienced Velda John of (Vel’s Fitness centre) for the second year running won hands down as she was the only competitor in the Body Fitness/ Figure category.

Only two competitors graced the stage in the Novice category and Kim Leon of La Borde’s Gym was the runaway winner on the night. He used his height to his advantage, wowed the crowd and placed ahead of Springer Lance Etienne who took second position.

In the men’s bodybuilding contest, Joneil, hailing from La Borde’s Gym who competed in the Intermediate division title last year and won said, “I didn’t disappoint my fans and family members who came out in large numbers to support me. Coming out on top of a very competitive field of athletes who represented their respective gyms feels great”.

On stage, his form was clear evidence of long hours in the gym as the young man perfected every pose.

Apart from the competitive aspect of the showpiece, the two Elite Pro Guest Posers Saint Lucian Natasha Samuel – Ploeg and Raylison Maria gave the crowd something to talk about with a thrilling and entertaining display.