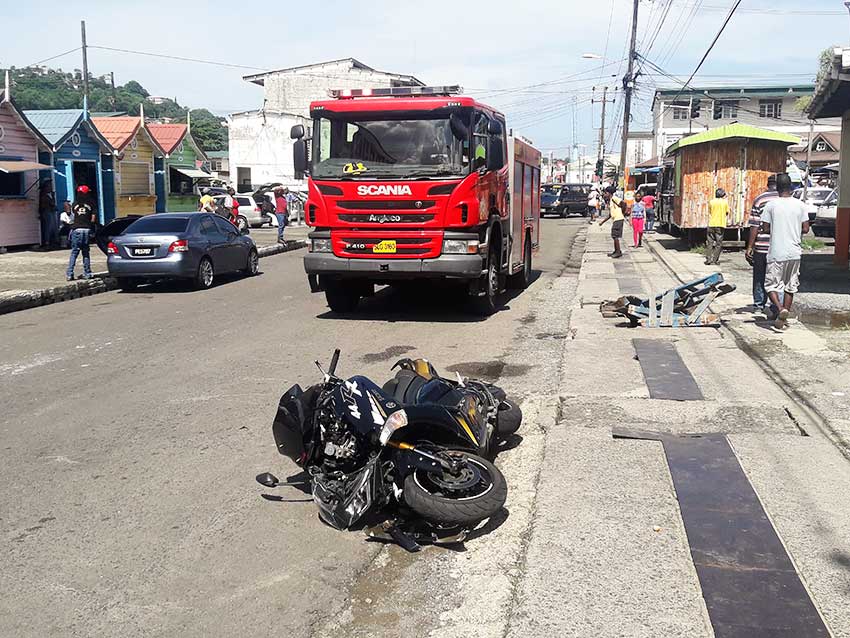 ONE City Police officer who was present at the scene of an accident which occurred on Jeremie St between a motorcycle and an eighty-eight year old lady, has said that the motorcycle rider did not attempt to vacate the scene of the accident as certain eyewitnesses alleged. The accident took place on the morning of Wednesday August 28th. A news article which contained this avowed report by two eyewitnesses was published in the last issue of the VOICE Newspaper, dated 29th August, 2019.

According to the City Constabulary, the rider of the motorcycle, declined personal medical aid as he insisted that all care be administered to the wounded pedestrian instead. “When they came to assist him he said that he was okay and asked them to check on the lady,” Officer Cherubim from City Police remarked.

The rider on the other hand has expressed revulsion towards news publications which contained false eyewitness accounts. According to the rider, the pedestrian had suddenly emerged from the back of a bus which was on the lane opposite to him. He said that he swerved out of the way to avoid the mishap but the pedestrian coincidentally ran in the same direction which resulted in the accident anyway. He asserted that he was very cooperative with the City Police Officers who were in the vicinity at the time of the accident. “They assisted until the arrival of an ambulance and the traffic unit,” he said.

He stated that he provided all the documents which were requested by traffic police officers who later arrived on the scene. “The officers asked me for my documents, that was provided with no issue, no problems whatsoever; license, registration, insurance… everything was provided.”

The rider said that after he had taken the motorcycle away, he went to the hospital to check up on the wounded elderly. “I was there with her daughters and her grandchildren. I did not know her status so I even went along and gave her daughter $200 towards whatever medical attention that she would have needed immediately, and I exchanged numbers with them and I left.” In the end, the rider who is also a member of ‘Android Riders’, admonishes all bikers to ensure that they meet the legal requirements so as to avoid traffic laws’ violation.