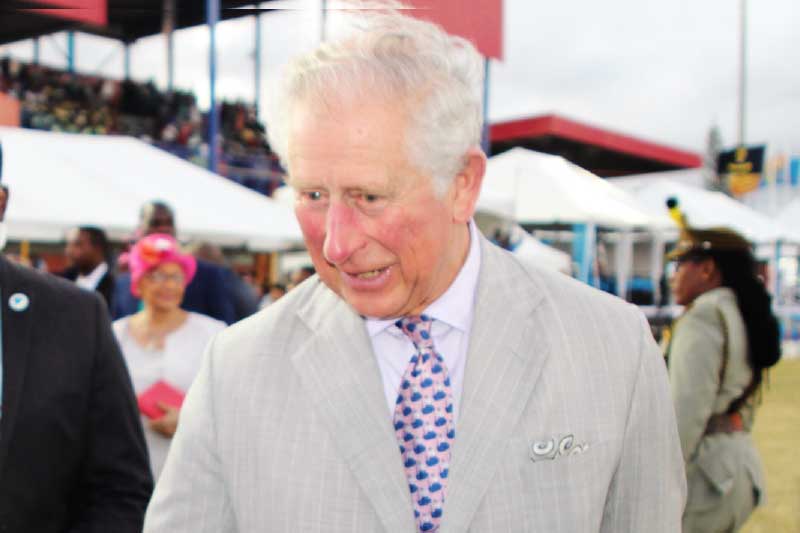 HIS Royal Highness, the Prince of Wales and guest of honour of one of St. Lucia’s 40th anniversary ceremonies, was warmly received on the afternoon of March 17th, by the people and government of St. Lucia in the community of Vieux Fort. The ceremony was held at the Phillip Marcellin Grounds in Vieux Fort, and included a military parade and musical performances by the youth of St. Lucia. The event was open to the general public and was attended by large numbers.

People from all over the island gathered to see the famous Prince Charles. After much anticipation he finally emerged from the automobile which bore the blue license plate which read “Official 19”, and was greeted with cheers of welcome from the young students on the stands. Amidst the general enthusiasm, a little girl was heard asking her mother whether Prince Charles was a real prince. The event was attended by a number of dignitaries, including, the Governor General, Sir Emmanuel Neville Cenac; the Prime Minister and Minister for Finance, Allen Chastanet and Minister in the Ministry of Tourism, Fortuna Belrose. At the start of the ceremony, Prince Charles made an inspection of the Police, Ports Police, Fire Service and Cadets, which formed the military parade.

There was a rendition of the song “St. Lucia Unite,” which was performed by the District Schools’ Choir, that Prince Charles, the members of Parliament, and the wider audience appear to have enjoyed. The Prime Minister Allen Chastanet made an official address, in which he stated that the visit of Prince Charles was his third to St. Lucia. This address was followed by a musical creation, composed by the renowned St. Lucian musician, Ronald ‘Boo’ Hinkson, which featured the vocals of Wilburn Mathurin, Manesseh Stanislaus and Jennifer St. Louis. It was a song which appealed for the unity of all St. Lucians. The second verse was comprised of the following lyrics: “This is a call to action. To every St. Lucian, lift one another so we can progress together, and let our future be truly blessed as we journey with godliness.”

His Royal Highness, Prince Charles of Wales, made his address in which he commended St. Lucia for her achievements over the years. He also expressed his hopes for the future of St. Lucians. “This is a strong society, I know, and one which places special emphasis on family and community,” he said. “I can only pray that Saint Lucia and her people continue to thrive and to flourish, and that prosperity, security and wellbeing might be the inheritance of many generations of Saint Lucians to come.” These were the Prince’s words of blessing for St. Lucia.

St. Lucia was the first country visited by the Prince of Wales in his twelve-day Commonwealth tour, which will be followed by visits to St Vincent and the Grenadines, St Kitts and Nevis, Grenada and the Cayman Islands. These visits are a celebration of the Monarchy’s relationship with the Commonwealth Realms. Prince Charles, in his speech at the ceremony in Vieux Fort, expressed how important the Commonwealth was to the Monarchy. He stated, “The Commonwealth has been a cornerstone of my life for as long as I can remember and, through all the unprecedented global change of these past seven decades, it seems to me that the Commonwealth remains as vital today as it has ever been. Importantly, the Commonwealth brings us together, and gives us the means to harness shared opportunities as well as to address common challenges.” These words were spoken in St. Lucia, by the Heir to the British Throne, to all the rest of the Commonwealth Realms.