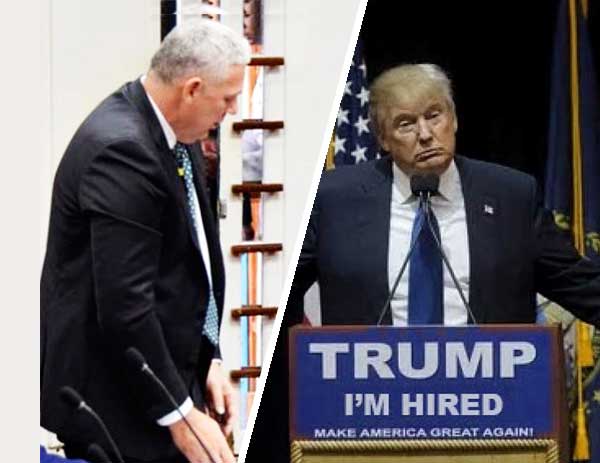 Asserting that the Caribbean Community (CARICOM) is divided on the issue of Venezuela, Prime Minister Allen Chastanet defended his meeting with US President Donald Trump last Friday in Florida claiming that this was not a meeting in which CARICOM was invited.

Chastanet along with the leaders of Jamaica, Haiti, Bahamas and the Dominican Republic had a sit down with Trump over a number of matters including the crisis in Venezuela.

That meeting drew the ire of some leaders of member countries in CARICOM like Ralph Gonsalves of Saint Vincent and the Grenadines and Gaston Browne of Antigua and Barbuda.

But the criticism of his colleagues in CARICOM, of which he will assume the Chairmanship four months from now, has not worried Chastanet at all, who has said he will not respond to his critics preferring instead to place Saint Lucia’s agenda above the criticisms.

Chastanet told reporters Tuesday that he was elected by the people of Saint Lucia, a clear indication to his critics that Saint Lucia comes first and as a member of CARICOM still has the right to pursue bilateral talks with other countries.

“So, if I am invited to put forth Saint Lucia’s agenda, I will do so but I have always been extremely respectful and will continue to be respectful of CARICOM’s positions,” Chastanet said,  he went on to describe the meeting with President Trump as “a very good meeting”.

“I think we are making some substantial inroads in making sure that we can get the assistance that is required in helping us secure Saint Lucia,” Chastanet told reporters. However, in a statement released by his office a few hours after talking to reporters, Chastanet is quoted as saying that “We had broad discussions around the need for there to be a regional approach to addressing security issues, but on a bilateral basis in assisting Saint Lucia in strengthening its own border control and accessing equipment to maintain that.”

Prime Minister Chastanet said solutions to applying for a US visa closer to Saint Lucia compared to having to go to Barbados for one was also discussed.

“Pre-clearance facilities. As you know Saint Lucia is currently constructing a brand-new airport terminal. They (United States) do have pre-clearance facilities in other countries and we have initiated dialogue with them so there’s a team coming down to follow up with us,” Chastanet said.

He said there was also discussions on trade and investment and while the statement released by his office spoke of discussion on the need for access to capital and a trade-focused agenda that protects initiatives such as CBERA, he told reporters of an initiative by the Trump administration that would be completed in 60 days with a team coming to Saint Lucia within the next 90 days in order to look into some investment opportunities “that we currently have here”.

“CBERA is coming to an end this year and we had very good discussions with the President on being able to extend the life of CBERA as well as revisiting the old Caribbean Basin Initiative and try to develop a more modern and appropriate measure,” Chastanet noted.

On the question of Venezuela Chastanet said he reiterated Saint Lucia’s position which is free and fair elections in Venezuela as a priority.

“Saint Lucia’s position on Venezuela is very clear. That we believe at this point that in order for Venezuela to get on with its life it needs to have fresh elections. There is a credibility problem right now with the regime as it pertains to how they (Venezuela) were elected last time. So Saint Lucia stands very strongly and very firmly in that we believe that to resolve this problem and not to cause any further intervention into Venezuela’s affairs that president Maduro ought to sit down to have a discussion on fresh elections,” Chastanet said.