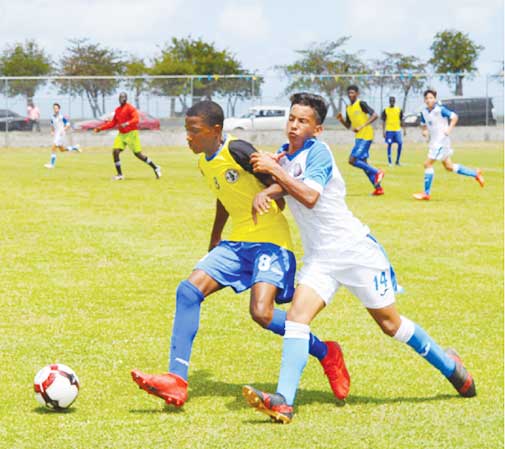 GOALS from Keegan Caul in the 37th minute and Jahlil Evans in the 81st minute gave Saint Lucia’s national Under-15 boys team a 2-0 win over Puerto Rico on Thursday morning (14th March 2019) at the Sab Sporting Facility, Vigie.

With a crowd close to 150 spectators which included Puerto Ricans, the final results do not show the actual level the Saint Lucia team is at presently; Team Saint Lucia for certain has quite a bit of work to do in their defense and offensive play as they continue their preparation towards participating at the 7th edition of the CONCACAF Under -15 tournament in Miami, Florida in August.

Caul broke the deadlock after the 37th minute, twisting past a defender before beating goalkeeper Ayezer Santiago (poor goalkeeping) with a low shot near the goal.

Saint Lucia went in at the halftime break with a 1-0 advantage.

On the resumption, despite the scorching heat both teams still managed to up the tempo just a notch, but it was Saint Lucia’s Jahnil Evans who was given the captain’s armband after stand-in captain Shaquan Nelson was substituted; Evans extended Saint Lucia’s lead in the 81st minute with a right foot shot that eluded substitute goalkeeper Pablo Ramos of Puerto Rico.

The Saint Lucians will have themselves to blame for not putting away eight scoring opportunities offered to them; while Puerto Rico squandered only two.

The Puerto Ricans Under-15 players and technical staff are currently on a Caribbean cruise and they too are preparing for the CONCACAF Under-15 Tournament in Miami.

The young boys from the northern Caribbean cannot be counted out as they gave a good account of themselves on the pitch; their level of fitness was way above that of Saint Lucia.

The match kicked off at 10.30 a.m., with weather conditions at the SAB pretty humid and just a light breeze coming in from north east. Referee, Kim Charlery midway in each half stopped the encounter allowing the players to take a three minute water break.

Following the encounter, the VOICE spoke to Albert St. Croix, Head Coach – Saint Lucia National Under-15 team about his team’s performance against visitors.

This is what he had to say:

“It gave me a good idea as to where we’re at and what to work on for future games before the team leaves for Miami, Florida in August.”

In terms of bright spots during the encounter, “Coming from the Dominican Republic, I have seen a number of players improved in their position and knowledge of the game, but we still have a lot of work to do,” St. Croix noted.

Speaking on the team’s successes on the regional circuit, St. Croix said, “It’s a question of all the youth games from the various football academies, it helps, they play a lot. The academies are more into the technical aspect. The academies help a lot in preparing the players.”

The last time the two team played each other, Saint Lucia won 4-1.