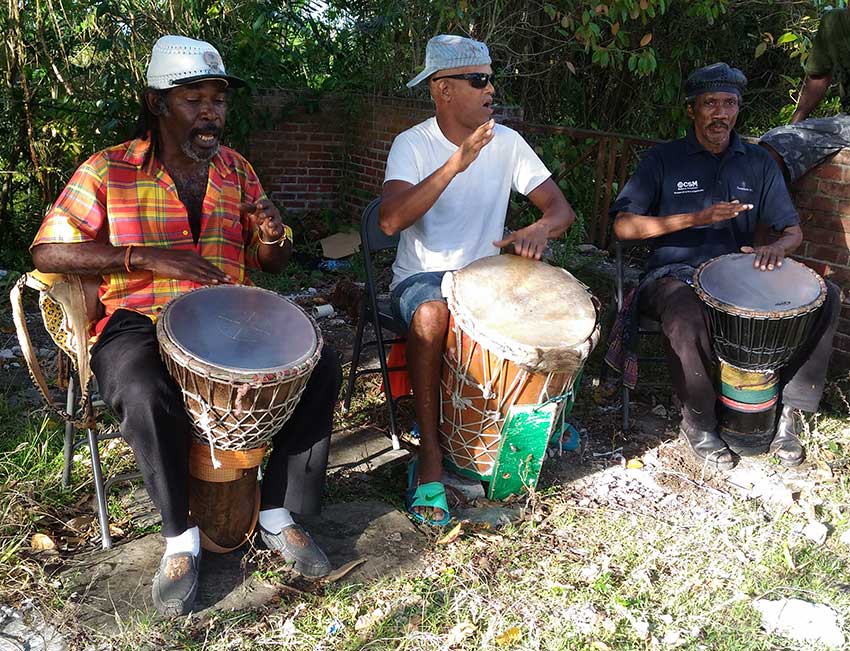 To mark the 1st anniversary of the fire that destroyed its headquarters and all its holdings, the Msgr Patrick Anthony Folk Research Centre held a vigil at Mount Pleasant on Monday, March 25th at 4.30 pm.

While the turnout was not as large as expected, the meeting was appreciated by all who had come together on the site owned by the FRC and to which it eventually hopes to return.

Cultural entertainment was provided by Lapo Kabwit drummers and poets Kendel Hippolyte and John Robert Lee, while updates on the rebuilding of the FRC were given by Executive Director Hilary LaForce, Founder Msgr Patrick Anthony and Deputy Chair Ms Kentillia Louis. The announcement was also made of the launch of an FRC rebuilding fund.

The FRC plans to hold this commemorative vigil every year until they return to their home site at Mount Pleasant. Msgr Anthony reminded those present that March 25th also coincided with the International Day of Remembrance of the Victims of Slavery and the Atlantic Slave Trade. This Day will also be remembered by the FRC annually.

FRC plans to make this vigil the first of a series of regular events that will be held at Mount Pleasant.

The FRC’s present headquarters which houses its offices and library is at Barnard Hill, the former Monroe College building.