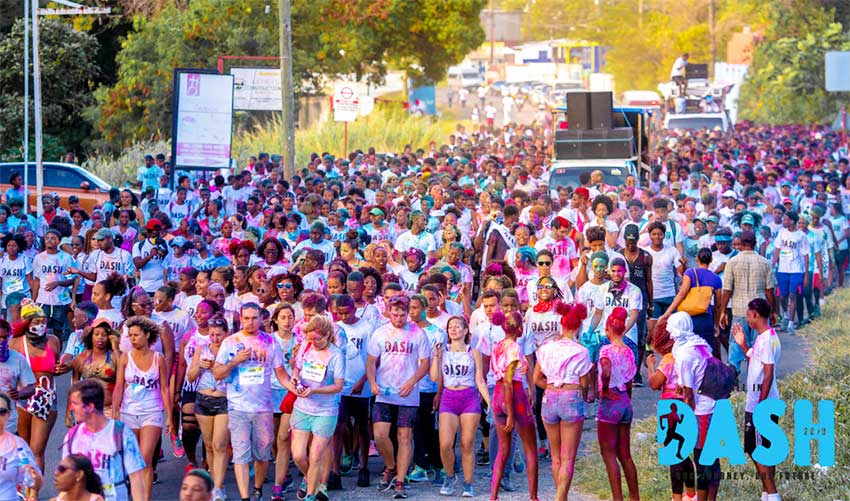 DASH Independence Colour Run has completed what has been described as its most exciting and impactful year yet.

The event is designed to coincide with the Saint Lucia Independence celebrations and has successfully maintained the title of most colourful event on the island’s independence calendar for the past five years.

Thousands of participants flocked the Choc Bay starting point well ahead of the 6:30 a.m. start time on February 24, 2019, where a kaleidoscope of powder could be seen splashed across individuals of all ages from head to toe.

With its usual on-time start and tight security, the walk which took most of 90 minutes from start to finish, was not only incident free, but credited for its precise management and an example for event organisers the island over.

DASH – a charity event – caters to tweens, teens and families and provides a revelry-type environment that encourages pride and nationhood among the younger generation. The event has grown consistently over the years with participants looking forward with anticipation to each new installment.

Proceeds from the event is donated to the Child Development and Guidance Center – the only multi-disciplinary developmental assessment centre in St. Lucia. It has, to date, over 50 volunteer therapists providing thousands of hours of therapy to children with various disabilities. Over 1,000 children have been assessed at CDGC over the years and hundreds more within the school system. DASH, as a group, has contributed over $20,000 in cash and an unquantifiable amount more in kind and referrals to the operation of the CDGC.

Managing Director Dione Benn reminded of the sincere nature of each DASH executive, all of whom commit without personal expectation to the growth and annual execution of the event.

“We are very, very pleased, and relieved, that it was the spectacle that it was. We do invest a lot of ourselves into every aspect this event and seeing it live in colour on event day is the most gratifying thing for us all,” Benn said.

She underlined the overwhelming support of corporate Saint Lucia which came out in resounding numbers to the cause in 2019.

“We achieved what we wanted to do, which was to bring Saint Lucia together in a happy, healthy and wholesome manner to celebrate our independence,” she said, adding that the CDGC could expect a “sizable” contribution in late March as the DASH executive moves swiftly to bring closure to the event.

“Definitely, from the looks of things it will be a sizable donation this year,” she said.

Director AkimLarcher said 2019 saw a focus in ensuring the pre, during, and post experience for DASHers were exceptional.

“We are excited to know that our efforts were appreciated and from all feedback, it was a resounding success. Year after year we listen to our patrons and only wish to ensure their energy, security and safety amount to a historic independence moment,” Larcher said.

Considering the growing nature of the event, DASH 2019 saw its largest security complement in event history, some obvious and others subtle as part of efforts to guarantee safety and security of participating public.

Robberta Rose, Director and founding partner of DASH said Saint Lucia is now at a point where an independence celebration is virtually incomprehensible without DASH. She lauded the supporting public and the Saint Lucia Independence Committee for their confidence in the growth and image of the event and for most importantly trusting the brand association.

“There is no way, we as a people can celebrate our independence in true spirit without giving back to those who don’t have a voice of their own,” she said citing the beneficiary charity CDGC and the many children who depend on its services.

“The charity element of DASH seeks to bring awareness to organisations that are youth based and we are proud to say that each paying participant has contributed to the development of a child of our beautiful nation,” Rose said.

Speaking to the future of the event, DASH Director AberraLarcher said 2020 – event year six – will be “another big year for Dash and we plan to bring out all the stops next year.”

He said participants can expect changes that range from an enhanced road experience to exciting sponsored powder stations.

“We plan to raise the level of the experience expected and provided. This will be matched by further improvements on our crowd control and of course ensuring that Crashers are not part of the paying Dashers,” Larcher said.