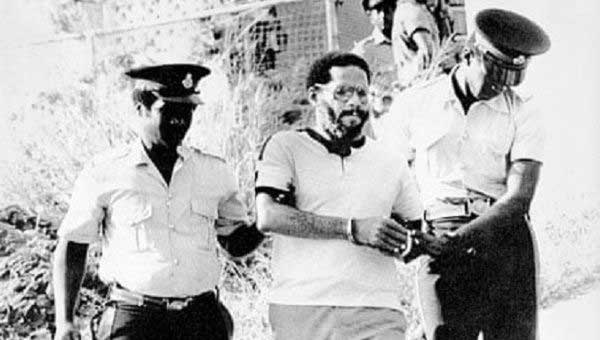 LOVE him or hate him, if you believe in ‘Giving Jack his jacket’, there’s one thing you have to hand to Grenada’s Bernard Coard: he has no time for wasting time.

Here’s the guy who was the veritable ideological and intellectual author of the Revolution, who started charting its early course even before returning to Grenada in the early 70s from England, where he penned a book outlining how the British education system deliberately ‘under-educated’ West Indian and other minority children.

Coard and Maurice Bishop first met in 1957, both aged 12 and grew up to be two young friends and politicians whose party, the New Jewel Movement (NJM) would 22 years later lead the first Revolution in an English-speaking Caribbean nation.

The two always had their deep (though deeply quiet) differences all along, but Coard always accepted that the more charismatic Bishop was the public face of the Revolution.

The barbed, burly and bespectacled deputy leader of both the party and state during the Revolution, has been squarely blamed for all that went wrong in Grenada in October 1983, for which he (and 16 others) were sentenced to death by a US-financed Kangaroo Court, spending 26 years as the longest-serving political prisoners in the history of the Caribbean Community (CARICOM).

Coard was not part of the group that killed Bishop and others, but the ‘trial’ was conducted along the lines that he had masterminded everything that led to the detentions and deaths that dreadful day.

The accused had their death sentences commuted by Prime Minister Nicholas Brathwaite and did the entire legal time of their life sentences.

But even though caged, the writer, economist, teacher and politician, with at least 15 years of pre-and-post-Revolution experiences wrapped inside him, clearly didn’t waste his time at Richmond Hill prison.

On The Hill, he led others (including among the 17) to turn the prison into a veritable enclosed school of learning where inmates with academic skills pursued related external correspondence courses with UK universities for degrees in law, among other subjects. Other inmates did regional secondary exams posting top national grades, while still others benefited from adult literacy classes.

Although not a trained lawyer, Coard also spent much time laboriously documenting accounts needed for evidence in the many appeals and other related court hearings on behalf of the Grenada 17 in Grenadian, OECS and UK courts.

Since his release, more evidence has emerged that reading and writing were among the main therapies that kept Coard alive and focused in captivity.

During his incarceration, he penned a largely unpublished classic: A Proposal for An Unorthodox Model for South African Social and Economic Development, which he penned between May 1994 and July 2000. It drew on the experiences of the Grenada Revolution to offer new models of development ideas to the post-Apartheid South African Government led by Nelson Mandela.

In 2017, Coard published his first of five books he obviously worked on while in prison.

In the first, entitled ‘The Grenada Revolution – What Really Happened?’Coard offers a systematic and very revealing account of his perspective on what really happened that October. Citing facts and figures, he offers 43 chapters looking at three basic topics: The Seeds of Disaster, The Crisis and The Catastrophe.

The first of the five-book volume offers previously unknown or untold accounts of everything from President Ronald Reagan’s early demands and the PRG’s responses to Cuba-Grenada differences, Coard’s discussions with Bishop during the crisis and ‘The Killing of the Revolution’.

In prison, he chronicled the detailed notes that would produce his promised series, the first of which includes everything from apologies to admissions of being wrong on several fronts and occasions.

Naturally, there are accounts that others will contest and those who have condemned him to Hell for eternity may not even bother to read his 341-page personal testimony. But Coard’s first book is required reading for anyone wishing to get another view of what really happened in Grenada.

Volume 2, entitled ‘Forward Ever: Journey to a New Grenada’ was released in September 2018.

But it’s not only one Coard doing all the writing.

Bernad’s wife, Phyllis, also a member of the PRG’s Cabinet of Ministers and President of the National Women’s Organization (NOW) was granted early release due to failing health, which continues to haunt her to this day.

But, like her husband, while institutionally enchained, Phyllis’ hands remained untied.

The Jamaica-born intellectual released a memoir titled ‘UNCHAINED: A Caribbean Woman’s Journey Through Invasion, Incarceration and Liberation’ on February 10, which is as revealing as her husband’s first two, especially from a human interest perspective.

Bernard and Phyllis Coard will not win a popularity contest in Grenada or elsewhere in the Caribbean.

They still suffer from the 40-year hangover of hatred harboured by those who have refused to even blink, far less remove their wooden goggles to take another wider and more holistic retrospective view, over time, of what really happened in Grenada.

But just as the history of political and ideological debate has always recorded divergent views between forces on the same side (like between the Bolsheviks and the Mensheviks after the Russian Revolution or between the Fabian Socialists and the Scientific Socialists in Europe), the roles and arguments of the two sides in Grenada ought to be studied likewise.

The Grenada tragedy has been sadly been presented mainly as a ‘Coard vs Bishop’ story. But for purposes of research and better understanding of what really happened, the perspectives of all sides on what went down in Grenada in 1983 – and during the four-and-a-half years of the Revolution before — should be treated as bases for retrospective analyses and logical conclusions that will draw lessons for current and future consideration.

There’s a creole saying in Saint Lucia (and other French Creole speaking Caribbean states like Haiti and Dominica): ‘Hate dogs, but admit their teeth are white.’

Applied to the Coards, this crude indigenous proverb creatively applies, given the frankness of their disclosures and admissions.