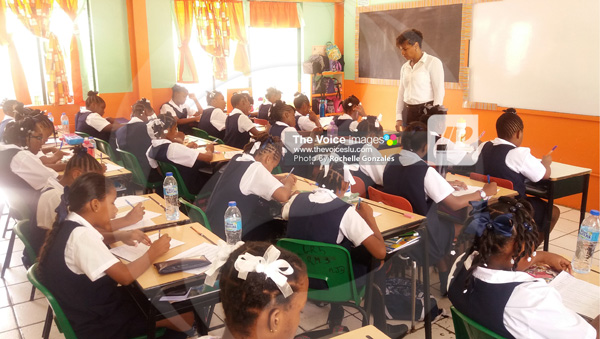 IN order to establish equality among the sexes we need to revolutionize our education system from its core. If we do that, then it will not be too long before we seize to redress the miseducation that our society constantly suffers from. The ideologies that we have been conditioned to accept as children, become the attitudes that are perpetuated throughout our adult lives. That is one reason why so much effort is exhausted on teaching society the fundamental truth that men and women from all walks of life are equal.

If girls and boys are taught from the earliest stage of childhood to realize that they are equals, then it would not be necessary to remind them of this simple truth so copiously later in life. We dress our girls in skirts for school, and instruct them for the sake of morality to restrict their movements, so as not to expose their undergarments, while the boys are allowed the freedom to play and run wild as they wish. The disparity that children are taught to accept, is one of the major causes of inequality that women constantly face in society.

Women are perpetually branded as the weaker sex as if human strength existed in sinews alone. It was not too many years ago that women were frowned upon for reading books, or denied access to university. It is not unusual for these restrictions to be converted into other formats as well. According to research conducted by the ABC, the health of girls are more affected than that of boys, since they are less physically active due to the skirts and dresses they are made to wear in school.

Higher education sets the precepts for early childhood education, and in a society in which women struggle for equality, it is not surprising to discover that gender stereotyping is preserved from within the structure of education. Girls and boys must be allowed the same liberties from early childhood if we are hoping for the emergence of a society which embraces both genders as equals. Equal rights for men and women must be nurtured through equality among children. This means that we should not make it mandatory for girls to wear uniforms which sets limitations on their physicality. This is not a trivial matter, for the education and brilliance that we acquire can only be manifested in physical forms.

The history of politics, religion, and academia especially, are all synonymous with the subjugation of women. It is no wonder that gender inequality continues to pervade our schools and other social institutions. Sigmund Freud, who remains popular at university libraries, and who was a man of his time, made excellent strides in the field of psychology. However, a succession of those strides went backward due to his negative perspective on women and on the so-called “female psyche.” Most of society has been structured to suit the male gender, which explains the friction and shudder that is felt every time a woman joins the ranks. We surely cannot put an end to centuries of female subjugation without a little bit of an uproar. Society needs more women in leadership roles if we are going to change the concept of power and improve our societal structure.

The old Maxim (now a men’s magazine) which preached that “women should be seen and not heard,” is completely over-ruled. Women should be allowed to shout if that is what it takes to make their voices heard. That is one of the things that women’s rights stand for. They stand and they are reproached for their standing. In fact, the Women’s Liberationist Movement is still being blamed by many today for causing the decline of the nuclear family. The nuclear family has, for centuries, always suffered from one form of decline or other, as its female members were perpetually deprived from exploring their potential and contributing to the world at large.

The conditioning which propagates gender discrimination, from which women suffer the most, runs deep, and must be remedied from the roots which are continuously plunged in the minds of our young children. This article does not suggest that we pass a gender-neutral uniform policy, but rather advocates that girls be allowed to wear pants if they wish. It advocates that boys and girls should be treated equally if we are passionate about the vision of a world in which men and women can enjoy mutual respect, and gain fair access to the opportunities available. It advocates that we should not harden our boys and soften our girls. Furthermore, fairy tails are fairy tales, so let us not pamper our little girls with these fairy tail names. They are not Cinderellas, Rapunzels or sleeping beauties who wait for princes, knights and beasts to rescue them, or bring them back to life with promises of “happily ever after.”