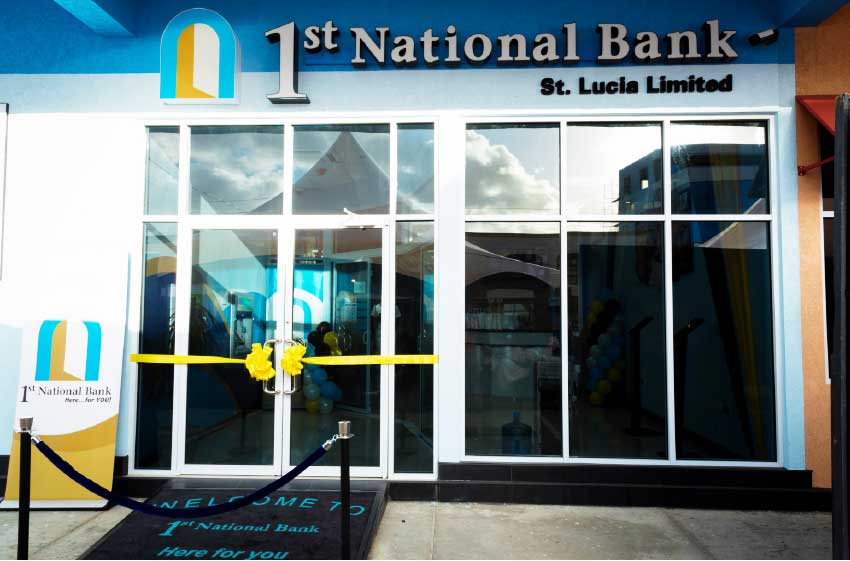 1st National Bank St. Lucia Limited officially opened its doors to residents of the south on February 11th 2019, at a brand new location on New Dock Road, Vieux-Fort. The Bank hosted a ribbon-cutting ceremony to mark the branch’s official relocation on Sunday February 10th, 2019 and to give customers and invited guests an opportunity to get a first-hand view and tour of the new and improved business unit.

The ceremony began with prayers by Bishop Eristhee followed by the Managing Director; Johnathan Johannes who welcomed all to the gathering and provided some brief remarks. Mr. Johannes explained the reason for the relocation:

“The Bank believes that the transition from Commercial Street to the Vieux Fort Plaza on New Dock Road was necessary to meet the demands of customers and to build better relationships with residents and entrepreneurs of the southern community. With technology, innovation and infrastructure in mind, the new location is equipped with two brand new ATMs, self-service online banking and internet browsing facilities and a friendly meeting room where customers can engage in meaningful discussions.”

The Chairman of the Board of Directors Nigel Fulgence took the gathering on a short journey reflecting on the history of the Bank chronicling achievements along the Bank’s 80year journey. He also paid tribute in observance of a minute of silence for some of the pioneers who helped shape this indigenous institution.

Parliamentary Representative for Vieux Fort South; Honourable Dr. Kenny D. Anthony who was a guest speaker at the event hailed the leadership of the Bank for its commitment to the people of Saint Lucia and thanked the Bank for being part of the southern landscape of St. Lucia from 1961 and staying true to its indigenousness.

Honourable Bradley Felix; Minister of Commerce, Industry, Investment, Enterprise Development and Consumer Affairs, made some brief remarks on behalf of the Honourable Prime Minister and Minister of Finance. Felix congratulated the Institution on its 80-year milestone and applauded the direction in which the Bank was heading in establishing an MSME Competency Centre. According to the Minister this could only augur well for the small business sector which contributes significantly to the economy of Saint.Lucia.

On the lighter side, the ceremony changed gears as the entertainment segment kicked in. It was refreshing to hear and listen to the harmonic blend of voices from the youthful and talented chorale group “Heart and Soul”; home grown from the south under the direction of Mrs. Prisca Lucien.

Not to be outdone, The St. Lucys Steelpan Orchestra from Micoud decked out in the national colours under the watchful eye of Band Leader Mrs. Veronica Augustindelighted and thrilled the audience with a variety of music genres from their local repertoire.

It is no coincidence that the relocation of the Vieux Fort Branch came just when the Bank closed off its 80th Anniversary celebrations in anticipation of welcoming Saint Lucia’s 40th Anniversary of Independence. In that respect it is fair to say that 1st National Bank St. Lucia Limited is truly an indigenous institution founded by Saint Lucians for Saint Lucians.