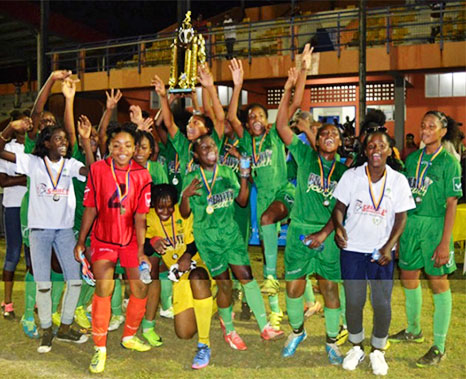 THE Vieux-Fort South Football League is scheduled to kick-off its Female Development Programme under the theme “Uplifting Women Through Football.” The event will run from Monday 18th to Friday 22nd, Saint Lucia’s Independence Day.

President of the Vieux Fort South Football League, Emmanuel Belasse said, “The Programme which was initiated through discussion with the League’s Past Vice President, deceased Jeffa Belasse, has been fittingly named in her honor. (Jeffa Belasse Female Development Programme).”

This year is the third of the programme and realizing that it has grown over the past two years, the League has now taken the decision to extend an invitation to the other Southern Leagues.

Belasse said, “The programme will be coordinated by Kaitlyn Mac-Issac, a former Canadian International player, along with her team of Canadian officials, with assistance from the Coaches of the respective League teams.”

The programme has two components. Apart from the on-field sessions for players, there is expected to be a one-hour presentation to coaches involved in female football on personal as well as coaching and administrative development.

According to Belasse, the programme will run from 4.00 p.m to 6.00 pm on Monday to Thursday and will culminate with a female festival from 10.00 a.m. on Friday 22nd February (Independence Day). This event will take place at the Phillip Marcellin Ground.