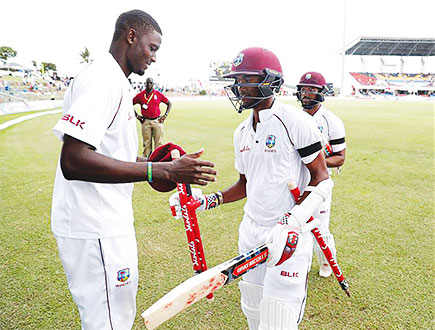 THE Daren Sammy Cricket Ground is the place to be from Saturday 9th to Wednesday 13th as the party/carnival type atmosphere comes to Saint Lucia for the Third Test match between home team West Indies and England.

The good news is, the home team have clinched a decisive home series victory against the visitors when they defeated the Englishmen by 10 wickets in the second Test on Saturday in Antigua.

The big question therefore, will the crowd come out to support in the same manner they did when the Windies women participated in the 2018 ICC World Women’s T20 Tournament played here in November? Has the West Indies senior men’s team finally bypassed the roundabouts of misfortunes and has taken a straight road back to winning ways an to bring that joy, pride and smiles to the faces and hearts of West Indian cricket fans?

Only time will tell.

Interestingly, it is only the second time in the past ten series that West Indies have won the Wisden Trophy and based on the records the visitors have dominated over the past two decades with seven series wins, while one was drawn. So definitely it’s a moment of pride, joy and celebration.

Alzarri Joseph despite mourning the passing of his mother on the morning due to a long battle with a brain tumour (according to reports from Antigua) picked up two top-order wickets, including the prized tag of captain Joe Root. Joseph finish with 2 for 12.

West Indies needed only 14 runs in their second innings to win and they quickly reached their target in 2.1 overs with more than two days to spare.

Following the win on Saturday the West Indies captain, Jason Holder said. “We hungry for success we made England toil in the field and it’s really admirable to see our batters stick it out. It was a tough wicket, with some variable bounce and it wasn’t easy. The way the guys showed character was remarkable; probably a turning point in the game.”

“I go back to the first day of the series when I won the toss and elected to bat in Barbados. The openers really dug in. Their judgement in which balls to leave was exceptional. Kraigg and John got us three consecutive 50-run partnerships and would have probably got a fourth [if England had set a larger target]. They really set the tone and got us through some tough periods.”

England captain Joe Root placing the blame on the batting said, “We have been outplayed. I thought as a bowling group we worked exceptionally hard and did some good stuff. Scoring under 200 in both innings is not going to win you many games of cricket. It’s been a disappointing performance with the bat here in Antigua and last week at Kensington Oval in Barbados.”

The home team won the first Test by 381 runs at the Kensington Oval in Barbados with a day to spare. Man of the Match, Jason Holder for his magnificent 202 not out in the second innings.

The two teams will return to the DSCG for the 5th ODI scheduled for Saturday 2nd March and the 1st T20 matchup three days later (Tuesday 5th).