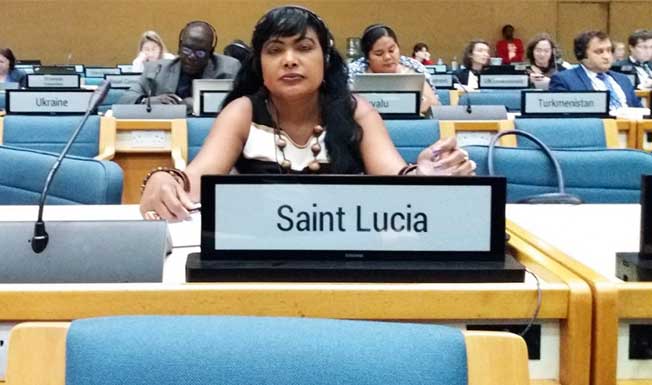 SAINT Lucia has once again proven itself a ‘David among the Goliaths’ when it took its place among the 288 participants attending the First Substantive Session of the Ad Hoc Open-Ended Working Group, held from January 14-18, 2019 at the United Nations Office, in Nairobi, Kenya.

The Report which was divided into seven (7) parts, gave a broad summary of International Environmental Law and Environmental –related Instruments. It then examined gaps concerning the principles of International Environmental Law with particular focus on the scope and status of the principles. Gaps relating to existing regulatory regimes were examined in areas such as protection of the atmosphere; conservation of biological diversity and protection of soils; regulation of hazardous substances, wastes and activities; as well as protection of fresh water resources, oceans and seas. Environment-related Instruments were discussed under the broad headings of Trade, Investments, Intellectual Property and Human Rights. Means of implementation at a national level including financial resources, capacity building, technological transfer as well as dispute settlement, compliance and enforcement mechanisms with particular focus on liability for transboundary environmental damage, were highlighted.

During the week long deliberations, delegates from the various Member States of the United Nations, as well as associated NGOs, Civil Society, the Judiciary, Representatives from various Multi-lateral Environmental Agreements such as the Ramsar, Basel and Minamata Conventions, examined the content of the Report and evaluated its performance as a basis for discussion on deciding whether a Global Pact was feasible as an option to address any identified gaps.

Saint Lucia which was represented by the Legal Officer in the Department of Sustainable Development, Ms. Kate Wilson on the penultimate day of discussion offered a way forward to the general body in suggesting that prior to the second substantive session, Member states, and all other parties present, should submit a comprehensive analysis of the IEL principles and related Environmental Instruments which impact their unique situations and provide concrete recommendations for addressing gaps, which the Secretariat should synthesize for discussion at the next substantive session. This suggestion was accepted by the Secretariat, and in concluding the Meeting, gave a deadline of February 20, 2019 for such inputs to be submitted.

The week long Meeting in Nairobi, Kenya was marred by a city center terrorist attack, which led to the UN compound being temporarily “locked down” as a preventative safety measure.

A large number of the Delegates including Saint Lucia so far seem to be in favor of a legally binding Universal Text which synthesizes the principles of the Rio Declaration on Environment and Development, The World Charter for Nature, The Earth Charter and follows the model set by Human Rights Instruments.

The Minister with responsibility for Sustainable Development, the HonorableDr. Gale T. C. Rigobert, welcomes this idea for such an initiative and gives her support to the Legal Officer to represent our interest on the international level.
UNEP as mandated by the UN Resolution 72/277 has set up a voluntary fund which ensures that Small Island Developing States like Saint Lucia are represented at these very important deliberations. (Department of Sustainable Development)