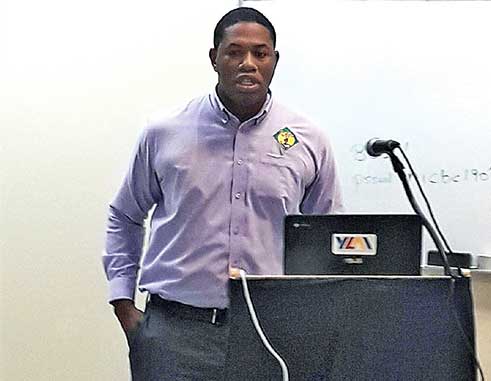 AT Startup Huddle St. Lucia’s Pitch Presentations last Wednesday at the Blue Coral Mall 3rd Floor Conference Room, two young entrepreneurs pitched their startups before an audience of students and other aspiring entrepreneurs. But, as with almost everything else in St. Lucian life, the topic of Government wasn’t far away from proceedings.

Johanan Dujon of Algas Organics and Samuel Lubin of KL Productions both presented their startups for six minutes each on Wednesday, before taking questions from the audience and from The Cut Buddy Founder and celebrity guest panelist, Joshua Esnard.

Given the sargassum issue plaguing St. Lucia and the wider Caribbean, some have wondered what sort of assistance, if any, that Dujon and his company have received from Government.

After introducing himself, Dujon shed some light on this question, stating: “Now, I love the preamble: How can I help you? How can you help me?

“We can help me by putting pressure on the government to give me some assistance. That’s how you can help me.”

This was pretty-much the first thing he said before going into his pitch. But he wasn’t done there.

Answering a question about getting into the US market with his fertiliser product, Dujon stated: “What we need to do is to build the supply cycle.

“The material is there, but previously, we could have only harvested maybe 20,000 to 100,000 pounds. Now we’re harvesting a million pounds of seaweed.”

He followed that up by again making reference to a lack of government assistance stating.

He explained, “That [production] number is going to go up in 2019 — and that’s without government assistance.

“I keep stressing that – without government assistance — because if we want to scale-up, we’re going to get there anyway.

“We’re not waiting for anybody. But if we want to capitalise on that, we want to speed-up what’s happening. Investment is always necessary from government and grant agencies…

Dujon didn’t have time to offer an interview, but from what he said, he was well heard: (i.e.) that as a young Saint Lucian starting-off what is sure to be a lucrative business, all he wants is for the government to see his light — and give him some more light.