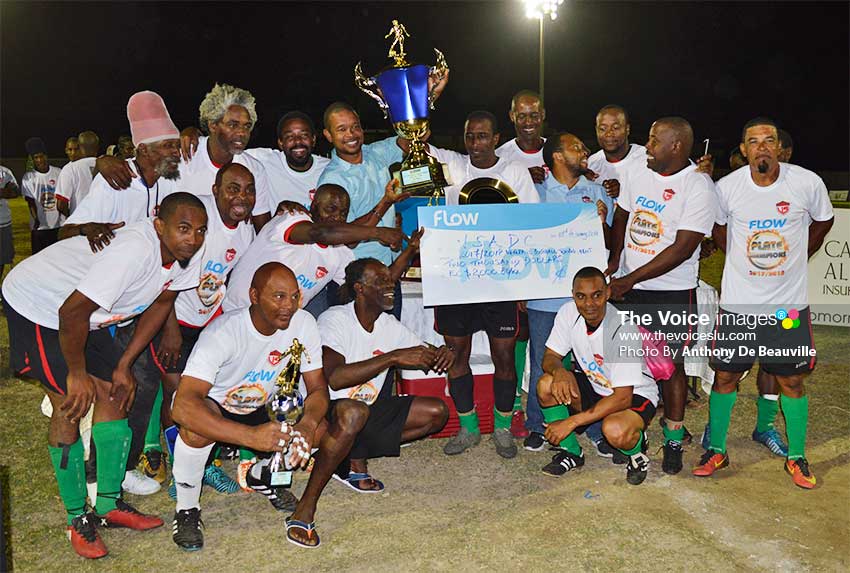 There is an old adage which goes this way, “First impression is the lasting impression” well Thursday evening press launch at The Harbor Club to usher in the 8th Veterans in Sports Inc Veterans (VIS Inc) Football Tournament which kicks off this weekend at the Phillip Marcellin Grounds in Vieux Fort was the best ever presented.

In the second encounter, Era Masters of Trinidad and Tobago with Earl Jean, Titus Elva and Elijah Joseph in their lineup will play Gold Cup Champions Soufriere in a Regional challenge.

Thursday evening’s press launch was a glittering one, classy as a number of key individuals associated with the 2018 -2019 tournament in some special way were in attendance.

During his welcome remarks, CEO of Veterans In Sports Inc Alvin Malaykhan said, “We have worked hard to get everything right for you and it is a great reward to see that you are enjoying yourselves”.

“I think it is also important to note while we might arrive as strangers, with our friends from Trinidad and Tobago and Canada, I know that before the night is over we will be discovering how much we have in common. A special welcome to Era Masters and Island Masters Touring Teams”. he  noted.

Malaykhan said, “We started with the revival of Veterans Football in 2011, where we have seen from eight teams to sixteen and now 22 with playoff match qualifiers becoming a major part of our preliminary stage in determining the final 20 teams to compete for the Grande Prize.

Malaykhan continued, “It’s our eighth year, we are continuing with the expansion of the tournament that has drawn local, regional and international appeal. In June 2016 we hosted the first ever International Veterans Football Invitational, drawing the participation of England National 45 and over, we also had 767 Ledgens of Dominica. We have continued with our support of teams wishing to take part in Barbados International Masters Football Festival. In 2015 we were able to fully fund Caricom Masters participation and in 2018 offered some support to the Gros Islet Veterans Football Team”.

We have continued with the sponsorship of sporting equipment for various teams and individuals, sponsorship of trophies for the Gros Islet Domestic Cricket League and continuing assistance in the development of young athletes such as Johnnel Eugene.

Community activities have also been at the forefront of VISI development plans.

According to the CEO, “This year we were able to launch our first ever Kick For  a Cure in aid of a cancer patient, all done in partnership with Caribbean Alliance and the participating teams of the veterans football tournament. We have slated this event on the Veterans Football Calendar and it will be held every 1st August moving forward”.