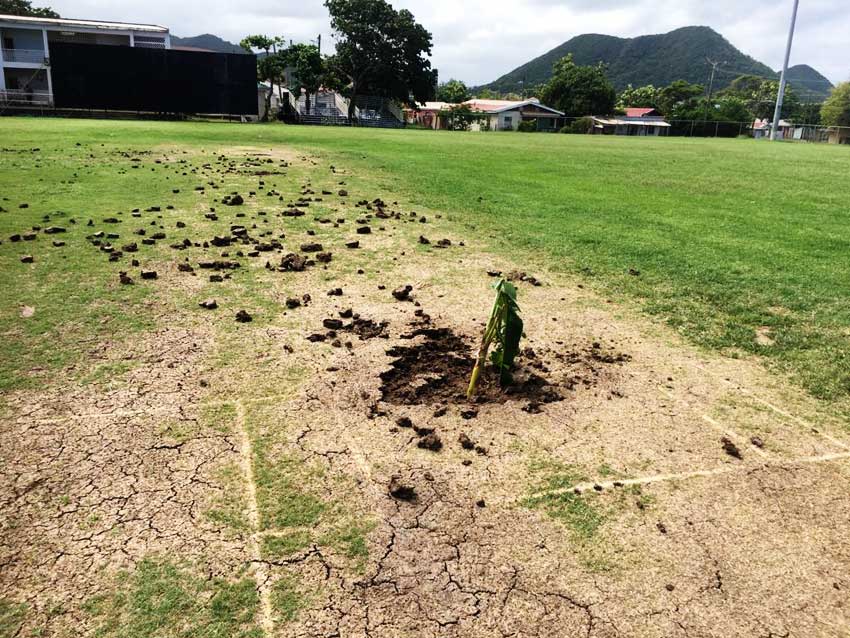 IT’S nothing new when it comes to vandalism of private and public property, disrespect for senior citizens, likewise sports officials and to top it up, indiscipline of all ages in Fair Helen. On Tuesday morning November 27th staff at Sports Saint Lucia Inc were summoned to the Gros Islet playing field (GIPF) to see for themselves what has been a recurring decimal (vandalism), but this time around, the attacked was the cricket pitch.

The GIPF got a few touch up patches here and there, due to the recently held ICC Women’s T20 World Cup, as that facility was used as a practice and training ground for the international teams in Group A including the Windies women who made it to the semifinal round.

For this reason the GIPL had been closed from August 2018 with no form of football possible on the square.

By all indications and as is customary the local cricket calendar normally bowls off in March and run up until August the same year hence no football could be played during that period of time.

The local football calendar starts in August on the GIPF, but due to ongoing World Cup Tournament, the Gros Islet Football League had to shift their preliminary stage of the District Representative Cup, Lenard Montoute, dubbed “Spider Cup” to the Corinth playing field, while some weekday matches were played at the La Clery playing field under lights.

Footballers in the Gros Islet town area therefore had no alternative for training due to the closure of the GIPF.

By all indications young men and women who love the game and with time on their hands seemed to have grown frustrated with the relevant authorities for not providing any answers to those affected.

On the evening of Monday 26th and early morning of Tuesday 27th November 2018, its more than likely, frustration may have taken its toll on these not so good hands and minds in destroying the one thing that they believe was hindering them from using the GIPF, – the cricket pitch.

According to reports, the Gros Islet Management Committee (GIMC), Sports Saint Lucia Inc (SSI) and the Northern Division of the Royal Saint Lucia Police Force (RSLPF) are actively looking into the matter with the view to bringing the culprit or culprits to justice.

The VOICE spoke to Alton Crafton, three times National Under-15 winning cricket coach in the Windward Islands tournament about this disturbing news. He said, “Well for me it is a shame for such to happen on the heels of a very successful ICC Women’s Cricket T20 World Cup Tournament leg in Saint Lucia”. 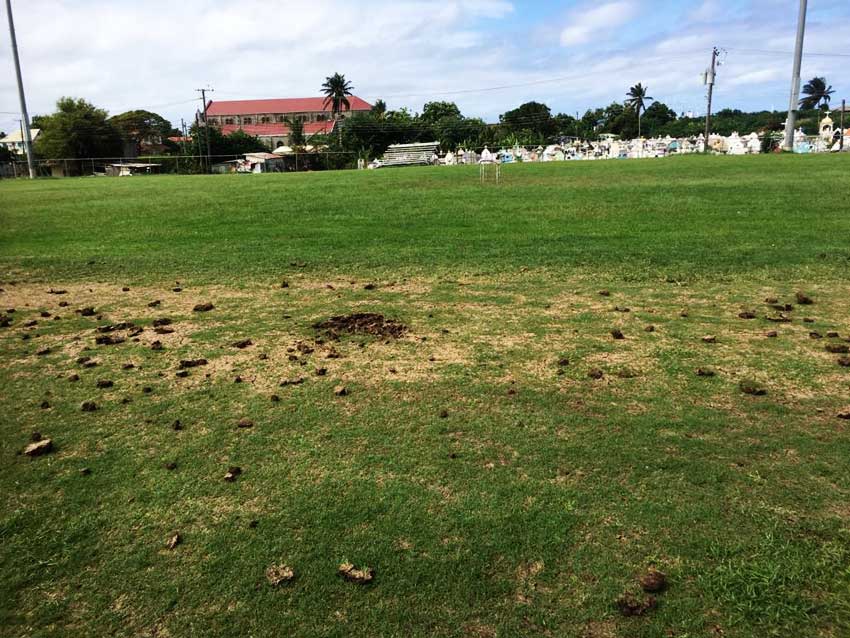 “The Gros Islet playing facilities were excellent. The wicket and the outfield were immaculate. The players thoroughly enjoyed themselves and for such blatant act to happen, it’s really embarrassing”. noted Crafton.

It was on October 31st, District Parliamentary Representative for Gros Islet, Lenard Montoute during his presentation at the launch of the 2018 “Spider Cup” made a special appeal to representatives of the various teams participating in this year’s tournament when he said, “Let us see it as ours, let us take responsibility to ensure we protect it and reserve it”. At the time he was referring to the work being done on the GIPF to accommodate the ICC Teams in Group A.

It was crunch time for the former sports minister when he said, “I couldn’t be bothered about the political implications of the statement I am going to make. If I ever see anyone vandalizing the facility, I am taking that person to the police and that person will have to go to court and face the consequences of vandalizing the public facilities. It is time we appreciate and learn to respect public facilities”.

“I intend to put cameras on the GIPF, to find out who it is that is doing the destruction of those facilities and when you are caught you will be made to feel the full brunt of the law and suffer the penalty so an example could be made of you for others to see, so we can begin to respect public property”.

With just 10 days before the first ball is bowled in the 2018 Windward Islands Under-15 Cricket Tournament scheduled to begin on Sunday 9th December at the GIPF. One wonders why was this done?

By all accounts the Saint Lucia National Cricket Association (SLNCA ) host of the this year’s tournament is keeping its fingers cross hoping the pitch can be rehabilitated in time and that no further disruptions are encountered in the coming days and during the matches in Saint Lucia.