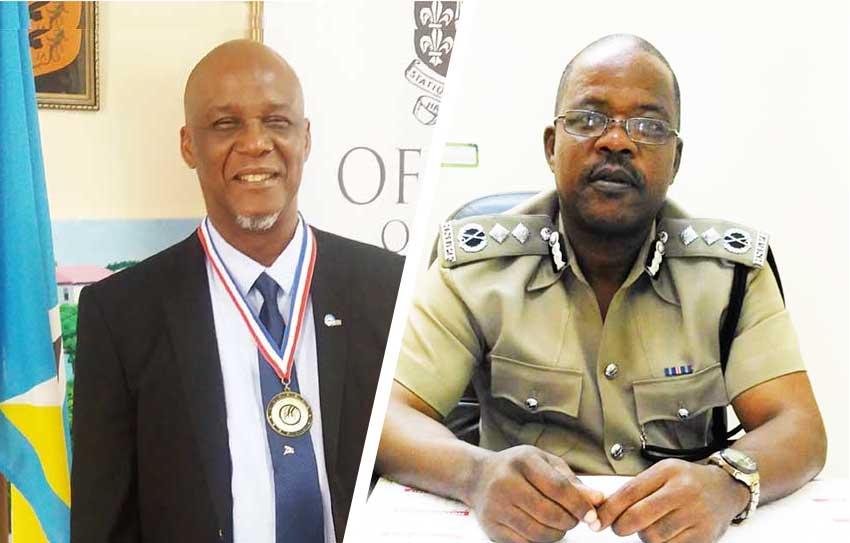 A quarrel over a failed meeting between Castries Mayor Peterson Francis and Police Commissioner Severin Moncherry could sour relations between their respective organizations responsible — in large measure — for the safety and security of citizens and visitors to the city.

But the Top Cop has sworn that while the row will not prevent him from working on a professional level with the Castries Constituencies Council (CCC) — which the Mayor heads — he will not remain quiet in the face of what he described as ‘attacks’ on himself and the police force by the Mayor.

Mayor Francis, on the other hand, appears frustrated at not having had the opportunity to sit with Commissioner Moncherry to discuss several topics relating to the City — particularly the areas dealing with safety and security — noting that “the CCC has a city to manage” and the related branches of authority that have a part to play must therefore show some level of seriousness.

The bruising public spat first reared its head at a press conference called by Mayor Francis at the CCC headquarters on Peynier Street Thursday morning, where he took The Commissioner to task for not showing up at a meeting that was scheduled between them.

According to the Mayor, “I have been trying to see my Commissioner of Police in Saint Lucia for the longest while. It happened that just a week before I went to Trinidad & Tobago, an appointment was made which moved from 11:30 in the morning to 2:30 in the afternoon to no time in the evening.”

According to the Top Citizen, the Top Cop demanded to know what the meeting was all about — something Francis felt was “disrespectful”.

“Not only are you not making time for us to meet, but you want to know what I want to speak about,” the Mayor said.

Mayor Francis believes that “Local Government is not being practiced in Saint Lucia,” hence the reason why a mayor will always find himself or herself in conflict, even with his or her line minister.

Quick on the draw, the Top Cop told the press: “I’ve heard the comments of the mayor. I consider his comments reckless, callous and an attack on the Commissioner of Police – and, by extension, the Royal Saint Lucia Police Force.”

The Commissioner admitted to having set up a meeting with Francis, but said various other appointments somehow interfered with the scheduled times, resulting in him asking his secretary to reschedule.

“That meeting was adjourned to 8th November 2018, in which I met with the CEO of the CCC along with the HR officer.

“We had a meeting that was very fruitful. We discussed training, both locally and regionally, for the city constables, uniforms and a master plan for Castries City,” Moncherry said.

He continued: “So, for The Mayor to say I ‘refused’ to meet with him, that is untrue.

“Also, since I assumed office, I have met with The Mayor on many occasions. The Mayor, from what I have seen in the past, has launched an attack on the Royal Saint Lucia Police Force.”

The nation’s Top Cop said he will continue to have a professional relationship with The Mayor and continue whatever collaboration exists between the Police Force and the CCC, “but I will not allow The Mayor to step on my toes and remain quiet.”

Meanwhile, while the big guns talk, the rest of the society continues to observe quietly.

The nation’s top police officer and the capital’s top citizen have drawn a deep line in the sand and various stakeholders can be expected to start taking sides.

The Police Welfare Association (PWA) has become the first to take a position, saying it stands with the Commissioner in his war of words with The Mayor.

“We as the executive of the PWA stand with Commissioner Moncherry and warn that there must be no implications against him for speaking the truth,” the Association noted in a statement yesterday.