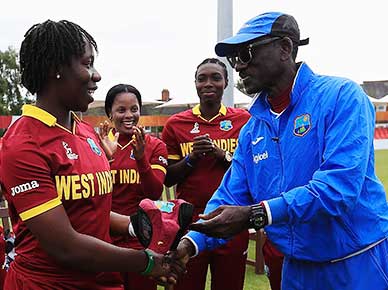 SAINT LUCIA’S talented all-rounder Qiana Joseph has been recalled to the West Indies Women’s World T20 team. After being selected on the squad of 13 for the last tour of South Africa, many Saint Lucians were shocked when word of her exclusion from the final 15 member squad hit the airwaves.

Joseph was then listed on the team’s reserve, and has been in training camp with the rest of the Windies Women since.

According to sources close to the situation, an injury to one of the players on the squad may be the reason behind Qiana’s inclusion on the final squad.

The ICC Women’s World T20 gets on the way in Saint Lucia on Saturday 10th November when England plays Sri Lanka at the Daren Sammy Cricket Grounds in Gros Islet.

A number of local and international artists will be performing at the grounds for the duration of the group stage matchups in Saint Lucia.

Joseph made her debut for in the ICC Women’s Cup in England against South Africa on 2nd July 2017; she last played in Windies colours versus England on 15th July 2017.