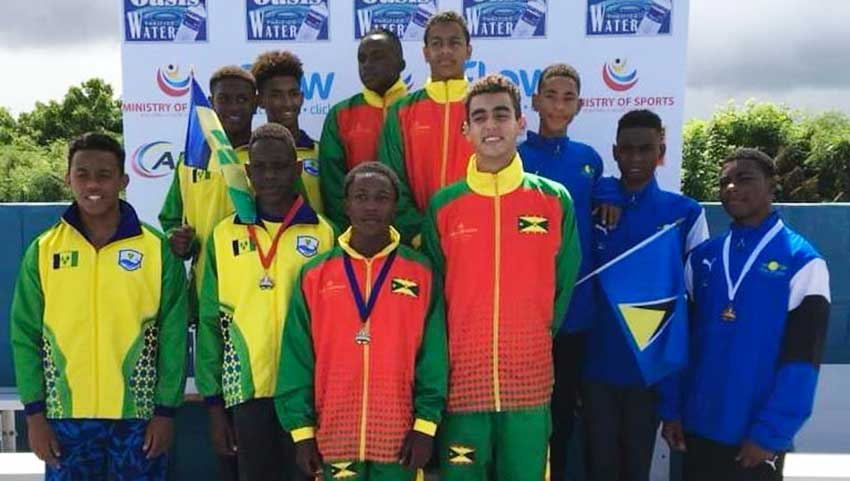 IT’S the final day of competition in the pool — and tomorrow, all eyes will be on the Open Water event which SLASA has opted out of this time around, at the 28th edition of the Organization of Eastern Caribbean States Swimming (OECS) Championship currently ongoing in Antigua.

Saint Lucia’s Fayth Jeffery leads the charge in the girls 8 and under with 32 points; 2 gold, 2 silver.

In terms of the points table, defending champions Grenada lead the charge with 822 points, 87 points clear of hosts Antigua and Barbuda (735 points), Saint Lucia 636 points and Saint Vincent and the Grenadines 529 points, round off the top four spots.

More on the team performance in Tuesday 13th November edition of the VOICE.

Meanwhile, “Dig Deep”, that’s the quote coming from Jennot Walter a swim parent whose son Jennot Walter is a member of the Lightning Aquatic Club and is currently in Antigua competiting in this year’s Organization of Eastern Caribbean States (OECS) Swimming Championship which commenced on Thursday evening at the Vipers Pool in Antigua.

By all indications, the Saint Lucia Amateur Swimming Association (SLASA) has adopted the above quote by encouraging its 34 member team to give everything they have, from deep within throughout the championship.

The participating countries are – Anguilla, the British Virgin Islands, the Commonwealth of Dominica, Montserrat, Saint Lucia, Saint Kitts and Nevis, Saint Vincent and the Grenadines, the French speaking Island of Martinique and hosts Antigua and Barbuda.

The above teams mentioned will be looking to dethrone defending champions Grenada, which last year, at the Rodney Heights Aquatic Centre, topped the points table with 1360 points, followed by Saint Lucia 1344 points, 3rd Antigua and Barbuda on 1240 points, 4th Saint Vincent and the Grenadines on 807.05 points.

In terms of preparation, the swimmers were under the watchful eyes of Brian Charles – Head Coach, David Peterkin and Peter James – Assistant Coaches.

According to SLASA, the team preparation was geared on building strength and working on areas where swimmers required improvements.

Saint Lucia’s aim is to bring home the 2018 championship trophy by placing high points on the board; SLASA continues to focus on its developmental plans and working with clubs to ensure all swimmers have a fair advantage of competition in Saint Lucia and at regional and international events.