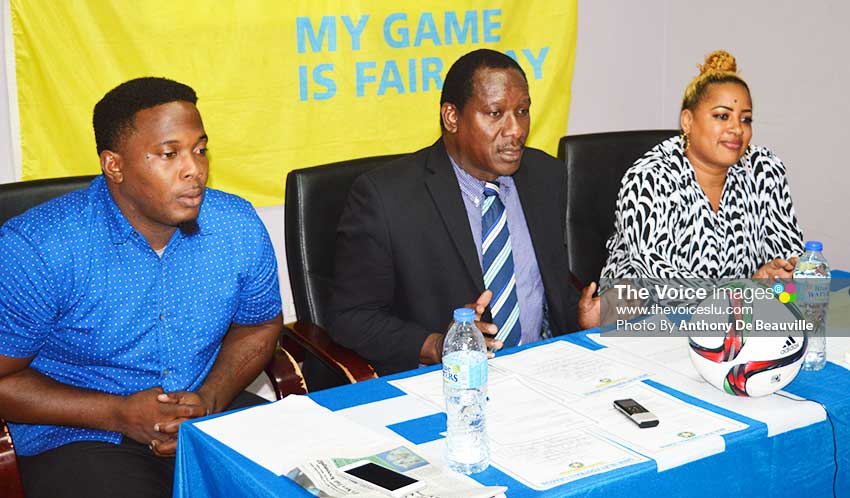 AFTER a postponement of the original date of Sunday 21st October 2018 due to persistent overnight rain which left the playing surface at the Corinth playing field unsuitable for play, the Gros Islet Football League in collaboration with the District Representative, Lenard Montoute will stage the ‘Spider Cup’ tomorrow from 1.00 p.m. with the march pass of all participating teams.

The action on the pitch kicks off from 2.00 p.m. between Monchy FC and FLOW Lancers and at 4.00 p.m., GMC FC versus Northern United A.

According to Charde Desir, Vice President GIFL, all teams must be present for the march pass as it carries 3 bonus points which will be quite useful for all teams. Each club must have at least 12 registered players to be eligible for the bonus points.

Speaking at the official launch, Parliamentary Representative for Gros Islet, Lenard Montoute said, I think this year we should have an exciting and competitive tournament; I am also pleased to see we are going to have a women segment of the tournament, that is a great development. I hope come 2019 we can move from four female teams to at least eight”.

“As Parliamentary Representative, I am keenly interested and concerned about the development of sports in general in this constituency; football being by far the most popular sport we want to ensure that not only we become competitive when it comes to national representation in national tournament but that we get our fair quota of players on our national teams and also we have a very effective developmental programme”.

He further indicated, “This year will no doubt be a very interesting one on top of what the GIFL is already providing for you, I will see to it that we come up with some additional new ideas in terms of rewards for clubs and players and to ensure that we provide you with the kind of motivation and incentives that you need”.

He took the time out when he made a special appeal to the representatives of the various teams, “Show a little more commitment, justify the confidence that is being invested in you by officials of the GIFL and the clubs. You will realise people are volunteering their time and their energy to ensure that they provide opportunities for you. The least you can do is to show your appreciation by showing a high level of discipline, commitment and ensuring you give of your best. It is part of your development and whether or not you want to become an elite footballer, the experience you would have gained from participating in the sport would be a lifelong benefit for you”.

Also addressing the gathering was 2nd Vice President with the responsibility and the designation of female football coordinator for the GIFL, Marsha Smith, “Tournaments of this nature are very significant, as sports does not only promote economic development and a healthy lifestyle, but is also a catalyst for social cohesion. Building a socially cohesive District in the football arena is one of the strategic priority areas in our integrated development plan for the district of Gros Islet. she noted.

Smith said, “Women in sport defy the mis-perception that they are weak or incapable. Every time they clear a hurdle or kick a ball, demonstrating not only physical strength, but also leadership and strategic thinking, they take a step towards gender equality”.

The tournament will have a female segment competition with four clubs participating namely GMC United, Big Players, Reduit FC and Northern United. This segment of the tournament will be played at the Reduit playing field.