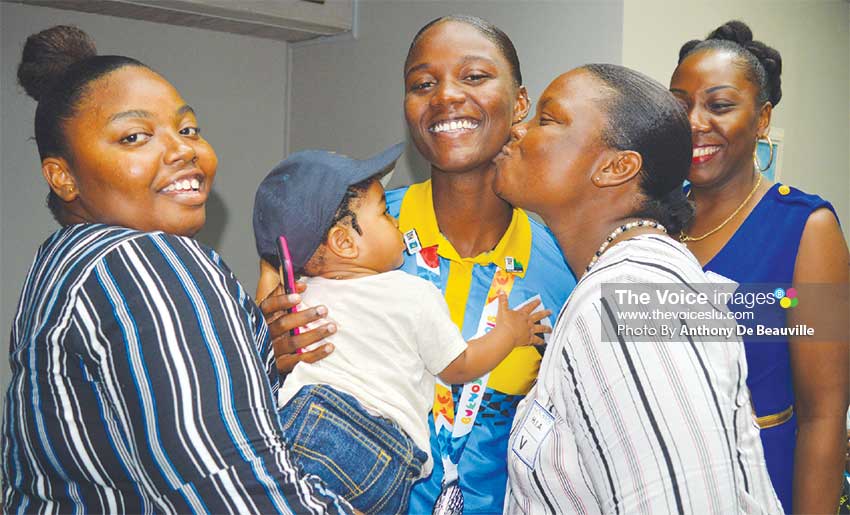 THE VIP lounge at the Hewanorra International Airport in Vieux Fort was a hub of activities on Saturday, as two government officials, one member of the Saint Lucia Athletic Association, three media personnel joined friends and family members in welcoming home the island’s hero, Youth Olympian and Silver Medalist Julien Alfred, from Buenos Aries, Argentina, where she just participated in the 100 metres for women.

There was a buzz of excitement momentarily, “That’s my girl!” proudly exclaimed Julien’s mother – Diana Alfred, as she finally made her way to the VIP Lounge.

The SLOC Deputy Chief reassured not only the returning athletes but all athletes who go under the SLOC banner that they have the support of the SLOC President and the entire executive and as customary, the SLOC will always pledge its commitment to the athletes.

Cooper said, “In 2016, when the SLOC President held its General Meeting, The President said she wanted to see more athletes stepping up on the podium; she also said, she will put the necessary resources into those athletes. It was less than one year later we came back home with gold medal in the Beach Soccer and the 100 metres for women from the Commonwealth Youth Games in the Bahamas and Gold at the Commonwealth Games Gold Coast, Australia; here we are today in 2018 adding more medals to the programme, a silver in the 100 metres for women”.

“While we may not be able to see our own athletes competing at home in international events this year, but we have the confidence at the SLOC, not too soon from now, that will see the construction of international size facilities to ensure our athletes both home and overseas continue to bring the success story”. He noted.

Sports Minister, Edmund Estaphane who attended the games in Buenos Aries, said, In Argentina we had a team representing Saint Lucia, this is what you call a team, there was unity, encouragement, togetherness and that inner spirit”.

Estaphane took the time out to commend the Chef de Mission and the coaches for a job well done.

In congratulating the team, the Sports Minister said, “The athletes are very dedicated individuals and our future looks bright for sprinting, swimming and the other sports in Saint Lucia”.

When it comes to the sporting structure in Saint Lucia, Estaphane said, “The structure of all the clubs, the Department of Youth Development and Sports and the different national sports federations we will have to improve on them; at present we are doing some serious work and in the not too distant future it will be futile and the future will look bright for Saint Lucia”.

In terms of parents, he went on to congratulate Jayhan Odlum Smith’s mother for making the trip all the way to Argentina. He said, “If you have that attitude, your children will go very far in life”.

According to the Minister, Jayhan’s mother said she and her husband had to make a decision and one of them had to go to Argentina to give Jayhan all the support and encouragement he needed.

Acting Prime Minister, Lenard Montoute said, “On behalf of the government and people of Saint Lucia, I extend a hearty welcome back home to the entire team that represented Saint Lucia at the Youth Olympics Games in Argentina and to say congratulations to Julien Alfred on her accomplishment; your accomplishment Ms Alfred is a national achievement and for us as a nation we are very proud of you”.

Montoute said he sees Alfred’s performance as an inspirational, motivational and a beacon of hope.

On the outside, following the brief welcome ceremony in the VIP Lounge, it was a rush of hugs and embraces as the athlete from Survivors Track and Field Club walked into the terminal; the several minutes of welcome extended all the way to the outside where a few more people were waiting.