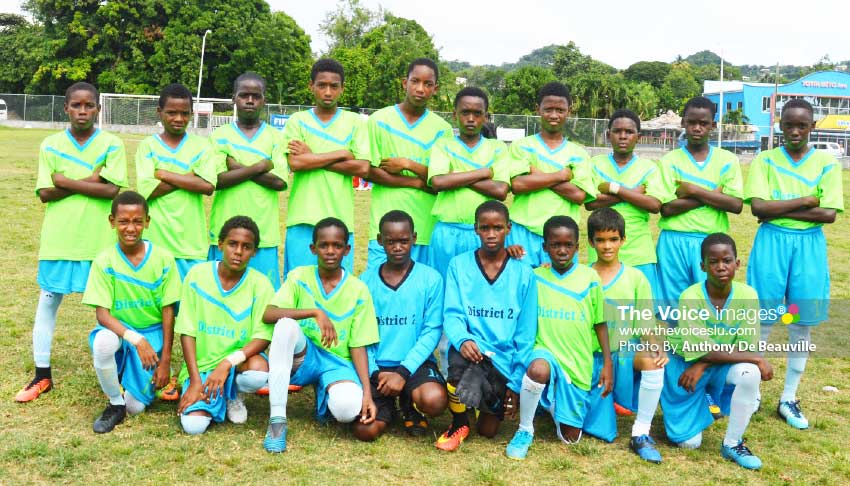 THE 2018 Inter District Primary Schools Football Tournament organized by the Ministry of Education/Department of Youth Development and Sports in collaboration with the Saint Lucia Football Association kicked off on Friday 12 October at the SAB Sporting Facility with wins for Districts 2 and 5.

Lascel Farquharson started things off with a goal in the 2nd minute of play; he further extended District 5 lead in the 19th minute of play to enjoy a 2-0 advantage at the end of the halftime whistle.

On the resumption, District 8 which comprises Bouton, Le Etangs Combined, Canaries, Soufriere Infant and Primary, Fond St. Jacques Primary pulled one back in the 33rd minute, a goal scored by Eymani Butcher to make it 2-1.

In a game that could have gone either way, as ball possession shifted from one team to the next, District 5 had enough energy left in their tank as they continued to press on for another goal. Finally their hard work paid off as Andy Theodule hit one home in the 60th minute to start a celebration both on and off the field which is how the scoreline remained up until the final whistle of Referee Thomas Francois.

The second game began in frenetic fashion between Districts 2 and 3 as the scoreline stood at 3-1 after just 28 minutes, following goals from Arnez Paul in the 2nd minute for District 2; Messiah Pinelle for District 3 equalized soon after in the 4th minute which made it game on from here.

Two quick strikes from Jadan Regis in the 25th minute and Josh George in the 28th minute both from District 2 made it 3-1 at the halftime whistle of Referee Marvin Hilaire.

On the resumption, District 3 showed some determination, but the boys representing District 2 never for once removed their feet off the gas pedal as they kept coming at their opponent. Their constant counter attack resulted in a penalty when one of District 3 players tried to shield himself from a shot taken to goal by a District 2 player only for the ball to deflect off his arm resulting in the Referee awarding a penalty.

No. 17 Jadan Regis who scored his team’s first goal stepped up to the penalty spot and made no mistake with a right foot strike to the left of the District 3 custodian making it 4-1 in the 60+2 minutes of added time.