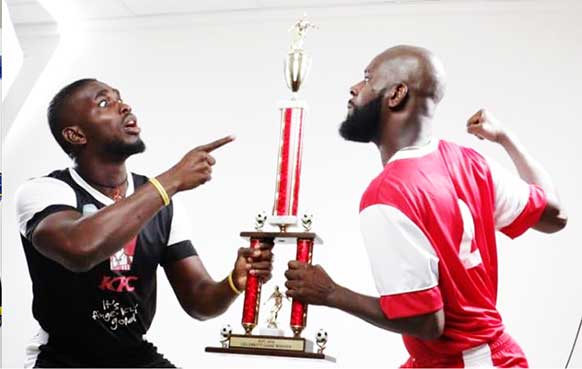 The evening card will kick off the party type atmosphere with the return leg of the Legends exhibition game between Compre FC and VSV scheduled from 6.30 p.m. Last weekend VSV defeated Compre FC 5-2.

In the second match, the most talked about Celebrity showdown between Hollywood HP and Ezra de Funmachine is scheduled for 7.30 p.m.

Some of the Saint Lucia’s leading local and international artistes and media personalities will grace centre court, some being first timers at the BIPF. It’s anyone’s guess as to whether there will be any seats available on the night as supporters for the various artistes are expected to take in the action.

The third game on the card, the grand finals is scheduled to kick off at 8.30 p.m. when Sandals La Toc takes on Saint Lucia Teachers Union (SLTU) for the EC$1000 dollars at stake. “Winner Takes All”

This encounter is difficult to predict as both teams have players on their roster who can swing the pendulum in their teams favour at any moment once given the opportunity to score inside of regulation time; but rest assured, the two goalkeepers will be tested between the uprights throughout the 40 minutes of play.

For Digicel the lone goal came from Brandon Eugene in the 39th minute.

For SLTU, the goal scorers were Gerlanie Neptune in the 12th, 14th and 26th minutes, Lynch Isidore in the 1st and 36th minutes and No.6 Dyke Francis in the 21st minute.

For WASCO, Garvin Phillip in the 28th minute and DylonSonson in the 29th minute.

After 35 games, a total of 218 goals have been scored with Ferguson St.Clair (Sandals La Toc) leading the charge with 10 goals.

TimeOut Entertainment co-founder, Lionel John spoke to the VOICE, he said, “We expect to get lots of support for the final and celebrity games in particular. The two teams in the final capitalize on their chances in the preliminary and qualifying rounds of the tournament and one expects the final to go down to the wire”.

In the celebrity matchup, there are some big names in there. Futsal enthusiasts coming in for the showdown can expect these artistes and media personalities to bring that same level of energy when performing on main stage onto centre court.

In terms of the level of play, John said, “It has improved immensely; some teams continue to show good form throughout; while teams such as Bel Jou, Sandals Grande and others are stepping up to the plate”.