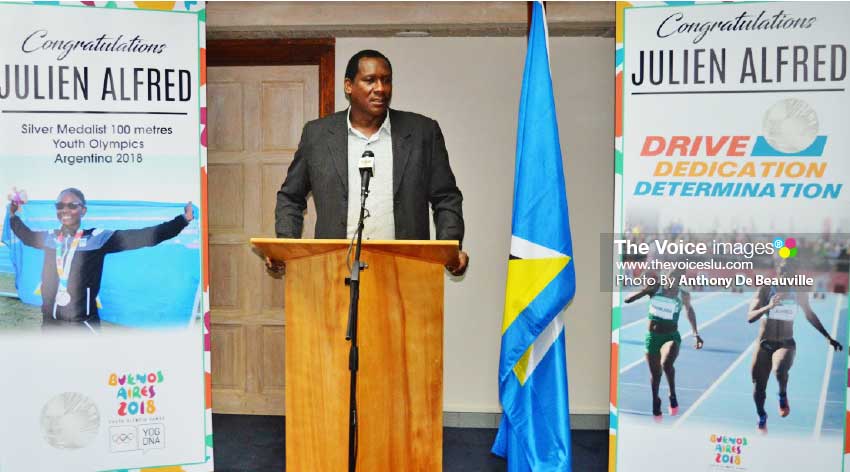 THE arrival last Saturday of Julien Alfred was not as big a fanfare expected on arrival in the VIP Lounge at the Hewanorra International Airport as extended to multiple Sportswoman of the Year and world-ranked high-jumper Levern Spencer on winning the Commonwealth Games, Gold Coast, Australia Gold Medal in the women’s high jump or Daren Sammy winning his second ICC T20 World Cup as West Indies captain.

But she was welcomed well enough in the circumstances.

I would say though, that from what I heard Acting Prime Minister Lennard Montoute’s speech, politicians should be held accountable for their promises made — particularly to young and aspiring sportsmen and women of Fair Helen.

In his speech, the APM said he would like to see the stakeholders present come together and begin planning for the kind of support those athletes deserve; he called on the government, national sports federations and the SLOC to devise a plan to provide the necessary resources when the opportunities arise; he also said, he has seen many talented athletes in Saint Lucia fall by the wayside and never make it to the next level because the requisite support was not in place, this government will not repeat that mistake. He also told the athletes that they have earned the right for that support, and it is a debt this country owes to them for what they have already done for Saint Lucia.

In welcoming the Saint Lucia team back the Acting Prime Minister said, “On behalf of the government and people of Saint Lucia, I extend a hearty welcome back home to the entire team that represented Saint Lucia at the Youth Olympics Games in Argentina and to say congratulations to Julien Alfred on her accomplishment; your accomplishment Ms Alfred is a national achievement and for us as a nation we are very proud of you”.

“We are also very proud of the performances of the other team members, though the rest of you did not medal but you gave of your best and your performances were outstanding”.

Montoute said he sees Alfred’s performance as an inspirational, motivational and a beacon of hope.

He rolled back the years to 1986 when he said, “Being selected to participate in the Commonwealth Games in Edinburgh, Scotland, on arrival in Scotland our then Sports Minister, Romanus Lansiquot (now deceased) sent a telegram indicating to us that we should boycott the games because of apartheid; now I can only imagine if that were to happen to some of you here what the feelings would have been”.

“I have to confess to you as a member of that team it didn’t matter because we were mere participants to those games with very little hope of making a dent in the medal count; we had gotten to Scotland so we had made it”.

Montoute said he was pleased to see how far we have come today and as a nation we can send athlete’s out to those international events and expect to make a mark by winning medals.

He said, “I don’t think it is pre-mature for us to begin to look ahead to the senior Olympics when I hear of young Shelton St. Rose placing 12th overall in the sprint event. The sprint is one of the events that is very advance and is normally dominated by countries like the USA, Jamaica and the likes, and for us to break through by coming among the first 12th in the men and second in the women, I think that is remarkable and testimonty as to where we are now in sports in Saint Lucia”.

Having given us all this hope and promise, having demonstrated such potential what next?

The APM said, “We as a government are now embarking on sports infrastructural development which will include a number of football pitches, courts, tracks around the island for the development of track and field. I am also pleased up until now; we only have one swimming facility of any significance in the north of the island, but a number of pools will be laid down as well not only to provide opportunities for training for swimmers but to diversify the locations islandwide so we can have more individuals participating in sports”.

Montoute a former athlete/coach, said, “Facilities alone will not do it, but I am confident given the testimony I heard from the Chef de Mission and the Sports Minister of the attitude, temperament and character of our athletes “They have what it takes to make it to the next level”. I implore our technical official and coaches to do their part”.

We must also understand that the world is replete with talented athletes, there is no shortage of talent and talent alone will not cut it; because every athlete who would have stepped out on that track with Shelton St. Rose and Julien Alfred and in the pool with JayhanOdlum-Smith would have been talented people, but to make you a cut above the rest; it takes commitment, dedication and it takes focus and I have heard from the various testimonies so far you possess those qualities.

The acting PM warned all the stake holders present at the ceremony including the Sports Minister, when he said, “I want to implore through my Minster for Youth Development and Sports, for us to come together and begin the planning for the kind of support those athletes deserve to have them continue to produce at that level not only as junior athletes but as they graduate to the next level that we can watch the Olympics Games and not just hope, but realise that medal count in those meets”.

“Government, Associations and the SLOC have to come together and devise a plan to provide the resources, (material/and other human technical support) that is needed to ensure that these athletes who have demonstrated to us, they have what it takes to go all the way. I have seen many talented athletes in Saint Lucia fall by the way-side and never make it to the next level that is because the requisite support was not in place. We are not going to repeat that mistake, you have earned the right for that support, and it is a debt this country owes to you for what you have already done for Saint Lucia”.

“Of all the countries that participated at the YOG there were many people there hearing Saint Lucia for the first time because of you. You are more than athletes, you are ambassadors to this nation and you have represented us proudly. We want to show our appreciation, give thanks and not squandered the potential and the hope you have given to us by ensuring that we provide the requisite support and encouragement that you need to go to the next level”.