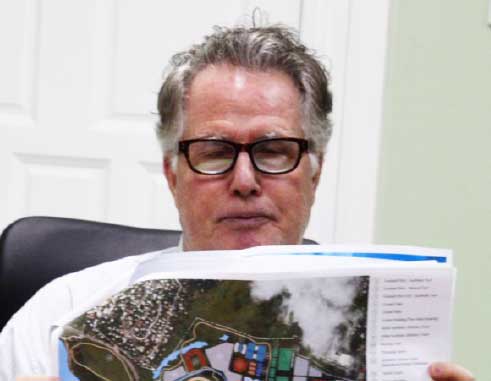 AS promised, the VOICE continue where it left off this past weekend to present to you, our loyal readers, with Part 2, re Consultant Don Lockerbie’s presentation or Master Plan, as it is called with the media as the government of Saint Lucia look to remedy or improve on the many dilapidated sports facilities on the island.

It must also be noted that Saint Lucia missed out on hosting the Commonwealth Youth Games last year, but our sportsmen and sportswomen were still able to go out, under trying circumstances, to win two gold medals. Sprinter, Julien Alfred (female) in the 100 metres and the Beach Football (male) team defeating Trinidad and Tobago in the finals to take home the gold.

By all indications the government of the day is putting its house in order to ensure Saint Lucia’s sportsmen and sportswomen in the various districts/towns get a state of the art sporting facility that they deserve.

This is what Don Lockerbie had to say, “This is not anything more than a preview for things to come, I can assure the nation we will have something in the Master Plan for everyone. The Master Plan has identified somewhere in the neighbourhood of 30 – 40 venues that we intend to look to upgrade and some will be new throughout the country where we have looked at the programmes, the teams and the facilities that exist and try to look from population and demographics; Master Plans are not about today or tomorrow, Master Plans are about 20 to 30 years.

What will this country look to require in the next 20 -30 years in the way of sports. The Master Plan is near completion for publication.

The Government has already determined to embark on phase one.

Phase one has identified several venues to get started right away. They would be the following:

Soufriere – The Mini Stadium. We are looking to develop a world class 400 metre track and a world class football ground, because the George Odlum Stadium (GOS) is not useable and hasn’t been used for nine years. Football has been playing its world cup qualifers and international friendlies at the Daren Sammy Cricket Ground and they are not happy there and trust me neither has the cricket people. It’s not a good marriage.

Because there has not been a national stadium, we will turn the Mini Stadium in Soufriere into a temporary new national venue for football with the blessing of the Saint Lucia Football Association as they are looking forward to a 2019 venue, they will then be able to host the next round of CONCACAF matches. Athletics will finally have a 400 metre track where people can enjoy sitting in the grand stand to watch the sport.

Part of the Master Plan is to figure out what to do with the GOS, but this time around the best result is to move those sports to a new venue.

We are looking forward to start on the final plans this fall, construction later this fall or early winter, and completion by late winter or early spring of 2019.

There are several other venues that are being selected for model purposes, but also selected for ease of multiple purposes constructed at one time. Therefore they would be the football ground in Micoud South – Desruisseaux; the facility will also have outdoor court sports, upgraded football facilities, perhaps lights, scoreboards and grand stands.

We are going to use that as a model, for future venues throughout the country which are not necessary full FIFA international level grounds, they will be community club grounds.

Micoud North, we are looking in the Master Plan to develop a full FIFA field, several new outdoor courts for netball, basketball and volleyball, cricket nets for practice and eventually a 25 metre swimming pool; a public swimming pool.

The swimming association is setting records and winning medals around the region, there is not a public swimming pool in the country. Here is an association that has put together one of the best reports I have ever seen in the world. The SLASA knows what they are doing and I am very proud to be able to say that, we will be helping SLASA.

The next stop – Dennery: It’s a great mile, because football and cricket are next to a school. We will be upgrading the cricket and football fields, there are lights there already and we will be electrifying those lights. We will be adding multiple sports courts for basketball, netball and volleyball. We will be looking at adding some hospitality areas, bars and fun amenities, toilets and children’s playground.

Also in Dennery we will be looking to take the sport facility and migrate it to the coast/waterfront by a (walking trail) and upgrading the waterfront recreating a safe walking wonderful environment that will make the entire project like a park for events for weekly limes.

That is the model for bigger multi sports complex; we have identified throughout the country, national stadium types, small club community venues (Desruisseaux), larger school properties (Micoud North), and the (Dennery) multi-purpose many sports opportunity.