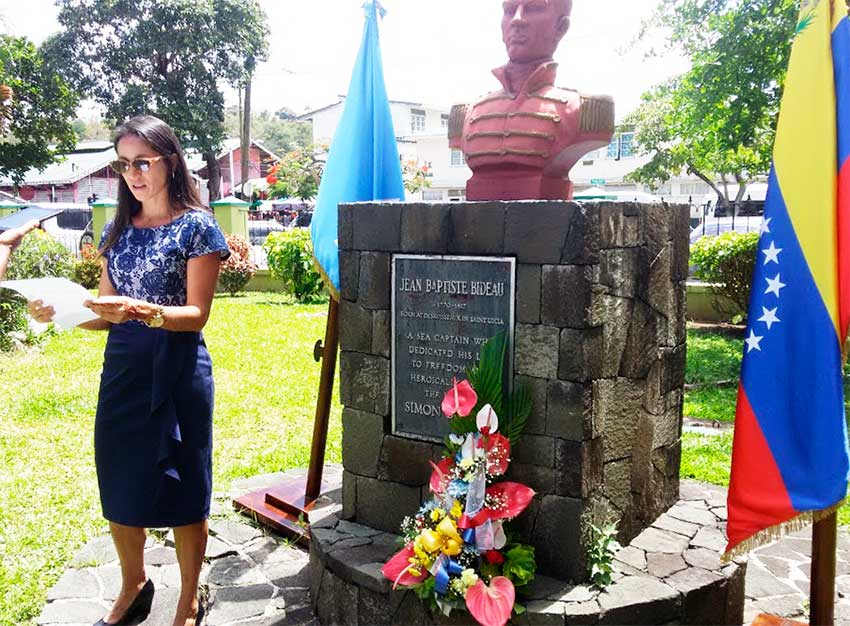 ‘His is a Story of Light, not Darkness!’

LEIFF ESCALONA, the Venezuelan Ambassador to St. Lucia and Marlene Alexander, the President of the Humanistic Solidarity Association (Saint Lucia-Cuba), along with representatives from the Venezuelan Embassy, gathered at Bideau Park in front of the bust of Jean Baptiste Bideau yesterday, to pay tribute to the Captain and navigator from Desruisseaux St. Lucia, who fought in the Revolutionary War in Venezuela.

During the brief ceremony, the ambassador said, “Today is a day of special significance for the Bolivarian Republic of Venezuela and Saint Lucia. Two hundred and one years ago, in the City of Barcelona in the eastern part of Venezuela, a brave soldier born on this island gave his life to defend the ideals of freedom and Independence.

“He was Jean Baptiste Bideau and his work and actions left an indelible mark of heroism, courage, loyalty, commitment and humanity, for which we are eternally grateful. We are gathered today, Venezuelans and Saint Lucians, to remember this great hero.”

According to the ambassador, “Bideau’s historic acts placed him in the ranks not only of the greatest warriors of our Independence, but also that of the intellectuals of that movement.

“Besides being an expert ship captain and navigator of the Caribbean waters, Bideau was an excellent strategist in land combat and this was evident as he was an outstanding Commander of the land troops.

“As he traversed the Caribbean region procuring soldiers, weapons and ammunition, he became the voice of the patriotic cause.”

Ambassador Escalona said, “He was a statesman, governor of East Venezuela and was one of the first who dared speak about the liberation of the slaves, which he decreed in East Venezuela.

“He was a great friend and loyal companion of Santiago Mariño and, of course, of Venezuela’s Liberator, Simón Bolivar.

“In his final years in exile, the Liberator was without resources, money and friends. However, Jean Baptiste Bideau was a constant figure at his side.”

According to the ambassador, “Bideau heard the cries for revolution in April of 1810 and enlisted in the War for Independence. He initiated his path to heroism when he, along with 45 other West Indians and South Americans, took part in the famous ‘Chacachacare Invasion’, an expedition in which he left Trinidad for East Venezuela. His is a story of light and not of darkness.

“Hence the famous and well-known passage in Simón Bolivar’s letter to his friend Fernandez Madrid in the year 1830 on the events that took place on the beach at Ocumare de la Costa, the central coast of Venezuela, on the historic date of July 14, 1816.”

“And I quote: ‘I had been deceived by a Field Helper of General Mariño …I was abandoned to my enemies on a deserted beach. I was going to shoot myself when one of them, Mr. Bideau, came back in a boat and saved me.’

“This act was the most transcendental for our history, since saving the life of Bolivar made it possible to change the history of America.”

The Ambassador continued, “A year later, Bideau was part of the very unjust event that occurred at the ‘Casa Fuerte de Barcelona’, considered by historians to be one of the bloodiest and most terrible events that took place in Venezuela, during the…War for Independence. Only a force of 700 soldiers, including Bideau, and 1400 civilians (women, the elderly and children) remained to resist the enemy force of more than 4000 soldiers, whilst awaiting nearby reinforcements, that never arrived.

“The attack began at 6 o’clock in the morning. By 2 o’clock in the afternoon, eight hours later, the enemy barely managed to break down the first defensive barriers of Casa Fuerte leading to the courtyard. Few were spared from this terrible slaughter. They were executed without mercy, most of them having been beheaded. It was not a battle; it was a massacre.”

The ambassador concluded with the following tribute to Bideau, saying: “His greatest sacrifice was to give his life for his ideals of freedom. For this reason we are here today, to commemorate his life, his contribution to our history.