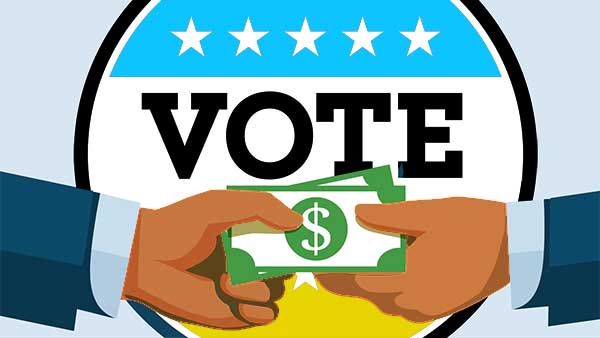 THINK about it. We’ve been talking a lot these past couple weeks about budgeting and financing. So, here are a couple questions:

Should voters and entities have to declare how much they contribute financially to political parties?

Should there be a Campaign Finance law to force parties to declare how much and each instance of financial support they get for elections?

These questions apply across the English-speaking Caribbean, which is increasingly being lobbied to adopt such legislation.

The Organization of American States (OAS) has been unsuccessfully promoting this particular agenda in the CARICOM region for over a decade. But it continues to, with a recommendation for related legislation among those it submitted to Grenada’s Prime Minister Dr James Mitchell after the March 13, 2018 General Elections, even before he selected his Cabinet.

But the real question is: Are Caribbean people and political parties ready for campaign financing?

Up to the end of the first half of the 20th Century (before voting rights were won in 1951), only property owners qualified to vote across the British West Indies (BWI). The majority was thereby excluded.

Today, however, everyone has voting rights — and as a voluntary choice.

Ahead of elections, contesting political parties across the region rely heavily on more quickly influencing or attracting votes with material ‘gifts’ and ‘contributions’.

The OAS proposal is hardly likely to gain traction among the Caribbean’s ruling and opposition parties — and the government they choose.

No Caribbean government has gone to parliament to fully and legally institute immediate, compliant and obligatory implementation of what ruling parties essentially regard as an impossible hole to close.

The parties’ unwillingness to get rid of what — for most — is the most decisive factor in their ability to influence voters, is another factor that has indeed frustrated successive advocates over time.

Elections in the Caribbean region (like everywhere in the Western world) have always been significantly influenced, if not dominated, by both the wealthy and the willing.

People largely feel they have a born right not just to pay party-membership subscription fees, but also to contribute however they can (including financing) to help boost their respective parties’ winning chances. This right (to contribute privately) they will also defend to keep a secret between themselves and their party.

Caribbean parties, on the other hand, have never before had to declare their sources of financing. How many ruling parties, therefore, will agree today to force the governments they appoint to impose such restrictions, knowing full well that ahead of every election they will simply (most likely) be challenged to create and devise new ways and means of bypassing these same regulations they created.

Money and politics go hand in hand. No penniless party can run an effective election campaign. But if that’s an accepted norm, it must also be expected that most parties will go to (and even beyond) the limits in their ability to attract campaign financing.

How possible is it to ban money from politics? Not impossible, but implementation will (most likely) be hardly possible.

Where campaign finance laws exist, the institutional parties in parliament have over time also padded the law books with legislation that legitimizes campaign financing through everything from million-dollar gold-gilded dinners-per-plate to anonymous donations expected to be officially declared – and in full.

In all of these described circumstances, just how possible will it be to implement Campaign Finance legislation across the Caribbean?