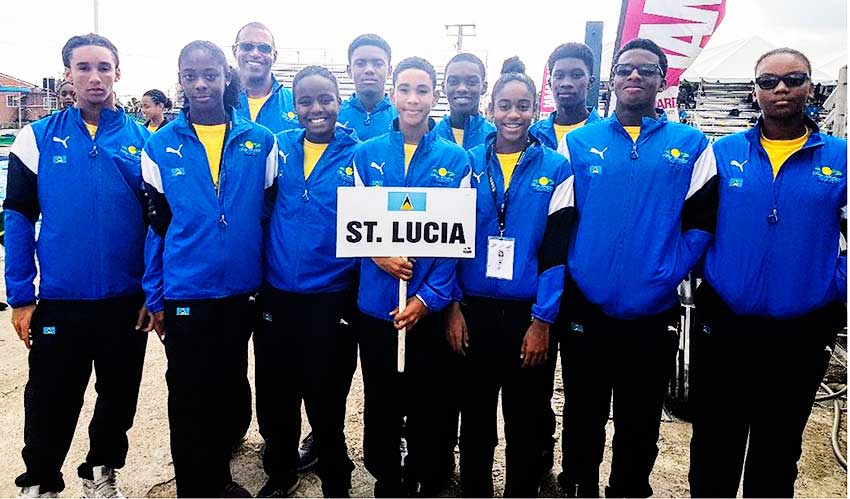 UNLIKE the national Track and Field junior team, the young Saint Lucia Amateur Swimming Association Swim Team remained consistent with the past years, returning home with medals: seven in 2015, two in 2016, four in 2017 and 5 medals from this year’s 33rd edition of the CARIFTA Swim Championship held in Jamaica. The team continues to make Saint Lucia proud!

The 10 swimmers are: Naima Hazell, D’Andre Blanchard, Naekesha Louis, Allandre Cross, Mikaili Charlemagne, JayhanOdlum Smith, Jamarr Archibald, Devin Boodha, Terrel Monplaisir and Veronica Brown and they made 14 finals at the Championship. Naima Hazell, D’Andre Blanchard, Naekesha Louis and Mikaili Charlemagne all went in as the top swimmers in 8 various strokes at the competition.

Ultimately, swimming rising stars emerged with 11 to 12 year-old Naima Hazell leading the medal charge with two silver medals in 50 Breast and 50 Free and a bronze medal in 50 Back. D’Andre Blanchard followed taking the podium for silver in 50 Breast and Bronze in 50 fly.

The 15 to 17-year-old boys were challenged in their first year competing in the age group with the majority of their competitors swimming in their second and third year in that category.

On the final day of competition, Veronica Brown took to open water completing the course in 1 hour and 25 mins.

Meanwhile, the Saint Lucia Amateur Swimming Association commends all its CARIFTA Swimmers on their accomplishments and efforts at the 2018 Swim Championship.

The association acknowledges that the team rose to the challenge despite the swimmers being out of a competitive pool for training for approximately a month.

The association thanks head coach Brian Charles, Team Manager Constance Rene and support parents for keeping the team focussed and motivated in working towards their goals.

Next on the agenda for Saint Lucia Swimming will be the Primary and Secondary schools Swim Meet and CCCAN.