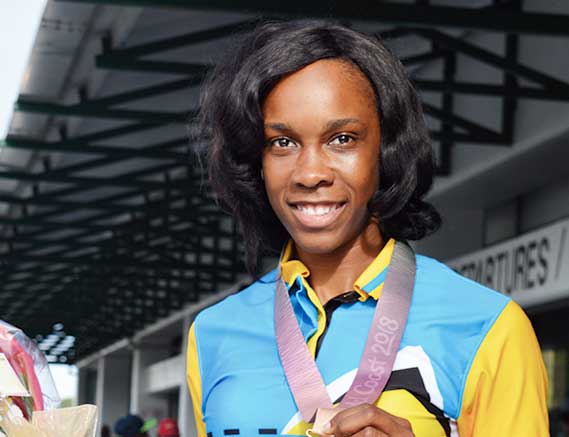 WHAT a moment it was, as Saint Lucians from all walks of life, for those who remembered the event, held their breaths as Levern Spencer competed in the ladies high jump event at the Commonwealth Games Gold Coast, Queensland, Australia.

Naturally, we all wanted her to win – and that she did, taking gold at a height of 1.95 meters.

The multiple Sportswoman of the Year, now dubbed “High Jump Queen”, will arrived at the Hewanorra International Airport at 2:15pm Thursday on Delta Airlines, where she met the Acting Prime Minister and Minister responsible for Infrastructure Stevenson King, other government ministers, Saint Lucia Olympic Committee President Fortuna Belrose and other members of the SLOC executive, Executive members of the Saint Lucia Athletics Association, staff of the Department of Youth Development and Sports, family members, the media and friends.

On Monday 23rd, Spencer will pay a courtesy call to her Alma Mata, the Babonneau Infant and Primary Schools and the Entrepot Secondary School.

By all indications, some people apparently have forgotten that she is one of us, from a humble beginning, our sports heroine — and now, our Commonwealth Games Champion.
We all were elated when she prevailed over the weekend.
Regardless of a medal, Team Saint Lucia made us proud under trying circumstances.

Some may not agree with me, but I did not hear one Saint Lucian being tested positive for the use of a banned substance, or thrown out of the Games Village. That means they are disciplined, to a certain extent they worked hard, although the length of preparation heading into a world event like the CWG or the Carifta Games, the preparation span should be a lot more, the sacrifice and the camaraderie appeared to be at an all-time high. Who gets the credit?

Wouldn’t it be great if those qualities could be practiced by most Saint Lucians?

The performances at the international level and the recently-held Commonwealth Games bring to mind and highlight the stark differences between Levern Spencer, JeanelleScheper and Albert Reynolds, all elite athletes in their own rights, and the reality of life in Saint Lucia.

With JeanelleScheper finishing 9th in the High Jump and Albert Reynolds, the 2017 Senior Sportsman of the Year finishing 9th in the Javelin, no better time to cheer them on, knowing that the discipline and hard work that made them world-class material resides within us. One would only hope that our local athletes in all sporting disciplines under the SLOC banner can learn from them, thus enabling us to be far better off than we are today.

Levern Spencer never for once wore our national colour in two minds, despite the manner she has been treated in the past by sports administrators, government officials (past and present) and Saint Lucians alike. When she fails they will bash her from head to toe, tear her to pieces on the various airwaves, but she continues with her one goal in mind: to be the best.

Just a gentle reminder, Ruth Beitia (Spain) won her first Olympic medal with a height of 1.97 meters at age 37 in Rio Jenerio, Brazil, Olympic Games in 2016.

I guess it’s time to fix all of this, all the hypocrisy leveled at our sportsmen and sportswomen and all the broken promises. It’s time to apologise. For those in authority (governments past and present) to sports administrators, the business sector, it’s time to put the money where your mouths are and stop giving lip service.

Levern is a God-fearing young woman with a solid family support, including the church. She remains focused on her dreams.

Some can’t even spell her first name correctly, far less pronounce it. (Its Levern and not Lavren.)

The gold rush is on for some individuals and companies. They will bring gifts of various sizes — nothing wrong with that, but who benefits? Is it Levern? No. The companies are the ones making mileage. But has anyone asked the question: As an Elite Athlete, how much will it cost to prepare for a major championship?

She first represented Saint Lucia in 1999. Even that some do have wrong, as they say ‘Oh it’s 18 years.” In 1999 she finished 10th at the Carifta Games in Fort de France, the following year in Grenada, she captured her first piece of silverware, bronze at a height of 1.73 meters and the rest is history.

As an elite athlete, Levern focuses on opportunities, takes criticisms and works with it. She is a complete athlete with a tremendous amount of confidence in every situation, as she acts in spite of fear and constantly learns and grows. These are just some of the attributes which make her the Commonwealth World’s No.1 ranked athlete, not by chance but through perseverance, discipline, consistency and hard work.

Finally, until we change our mindset as a people, we are never going to progress. We need to start with discipline, respect and accountability, then take it from there.

I hope that we learn before it’s too late.

For not only our country’s sake, but most importantly, for our sportsmen and sportswomen.